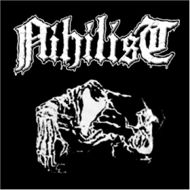 If you're any kind of death metal fan, you recognize some of those song titles above as classic ENTOMBED cuts. NIHILIST was the band that spawned not only ENTOMBED, but UNLEASHED (formed by Johnny Hedlund upon NIHILIST's breakup in 1989). In the span of a short two years, before morphing into ENTOMBED, this band laid the foundation for a sound that would change the face of death metal forever.

1988's "Premature Autopsy" demo (the first three songs here) already shows the promise of greatness to come. The sound is primitive, but the vicious bite of the songs already comes through, along with a healthy dose of influence from heroes REPULSION, plus the thrash and death of the day (is it just me, or do "Sentenced To Death" and the beginning of "Carnal Leftovers" have a little DARK ANGEL in them?). When "Abnormally Deceased", the first track from the "Only Shreds Remain" demo, kicks in on track four, though, the difference is remarkable — it already sounds like the ENTOMBED we know and love, if a bit more primitive and less in control of their newfound "truckload of mud" downtuned guitar sound. Not coincidentally, this demo marks their first collaboration with a then-unknown producer named Tomas Skogsberg.

The progression from each demo to the next — coupled with the fact that everyone in the band was under 18 the entire time — is just staggering. By the last three tracks (the "But Life Goes On" demo, recorded one stinkin' month after the "Drowned" sessions, the name change and the split with Hedlund) they've got the guitar sound nailed down, vocalist L-G Petrov sounds vicious and sick, and the overall sonic picture is remarkably similar to what was laid down on "Left Hand Path". Music industry vet and former zine publisher Ula Gehret contributed detailed liner notes that map the short, shocking journey these little kids took from basement demo deathbangers into a world-changing force. As he puts it, even the earliest material boasted "riff[s] that a group averaging 15 years of age have no business coming up with"!

Releases like this are so kickass, whether you were there trading the tapes in the beginning, or discovered Swedish death later, assuming ENTOMBED just dropped from the womb as pure geniuses and created "Left Hand Path" on their first try. "The Nihilist Demos" are awesome on their own as something to crank up and revel in the old-school vibe, as well as a document of a watershed era in the history of extreme music, one that has yet to be topped for sheer creativity and boundary destroying.