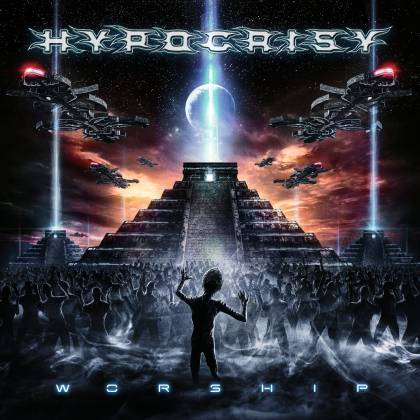 A classic example of a great metal band who are perennially taken for granted, HYPOCRISY have been incredibly consistent over the years. There has also been an unwavering dedication to standing apart from the death metal crowd evident in the band's music, and not just through Peter Tägtgren's undisputed mastery of production and mixing. Even as early as seminal albums like "Abducted" (released a mind-blowing quarter of a century ago!),HYPOCRISY's chrome-plated take on melodic but brutal death metal sounded both futuristic and endearingly impervious to deathly fashion. And there is something undeniably pleasing about the fact that, once again, "Worship" is another explosive and imaginative HYPOCRISY album that sounds like absolutely nothing else (give or take a few bands that may have borrowed the Swedes' ideas from time to time). "Worship" sounds vast, arguably bigger and more colorful than any previous album, but it also exudes a sense of urgency and channeled vitriol that many much younger bands would struggle to equal.

The band's last album, 2013's "End of Disclosure", was sturdy enough, but album number 13 starts in intergalactic destroyer mode and sustains that imperious, planet-shattering gait throughout, via some of the catchiest and yet most extreme songs HYPOCRISY have ever released. Have they ever written a more intense or vicious song than the opening title track? Almost certainly not. "Chemical Whore" is another instant anthem, built around a grinding, mid-paced groove and graced with one of Tägtgren's iciest hooks. "Greedy Bastards", meanwhile, is pure violence and sci-fi scree: part throwback to the days of "The Arrival", part newfound impetus and intent. In stark contrast, "We're The Walking Dead" is an inch-perfect, mournful ballad, replete with harrowing screams and a big, emotional chorus. Likewise, "Children Of The Gray" is prime, go-slow melo-death, redolent of the good old days when the genre was fresh and new, but imbued with sufficient quantities of HYPOCRISY's anticosmic spite that it still feels forward thinking and ruthlessly contemporary.

With no obvious weak points, "Worship" is very plainly one of HYPOCRISY's strongest albums to date. Whether rattling along at a demented pace on "Another Day" or dabbling in trippy doom vibes for "Bug In The Net", the Swedes' identity is so strong and the overall sound of this record so potent that it does, at times, feel like a genuine master class. Moreover, HYPOCRISY sound newly engaged with the whole business of being a ferocious metal band. The album closes with "Gods Of The Underground", a pointedly dramatic and punishing finale with an irresistibly defiant refrain and all the harmonized lead histrionics any metalhead could wish for. Again, it's masterful stuff. "Worship" – it's an instruction. Act accordingly.