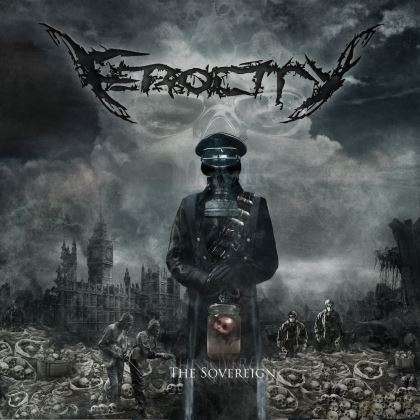 It's been a handful of years since Denmark's FEROCITY released "Cocoon of Denial", and if you're familiar with that album, you'll find things have grossly changed in this camp. It's not just the addition of new drummer Nikolaj Kjaergaard. Sure to get votes of approval from fans of the more brutal side of death metal, FEROCITY hardens their sound on their latest album, "The Sovereign", so much they're veritably a new band.

The most glaring change to FEROCITY's attack plan on "The Sovereign" is a full dispensing of clean vocals from Kasper Wendelboe, who roars and barfs the entire way through. Consider that an improvement if you prefer growls over cleans. This modification may have inspired FEROCITY to deliver a nastier product this time, but the strategy of having Wendelboe's painful throat scrapes on a constant torches the front end of the mix, so much they consume the rest of the band much of the time. On "Chain of Command" and "XIIth Legion", he not only smothers the band in spots, he gorges them out of the picture altogether.

Sure, FEROCITY is faster now, throwing out whip-snap grind elements and blast beats ("Son of Sam", "And the Rest is Silence" and "Blind Disciple", for example) galore. It trades the edgy tones of "Cocoon of Denial" for more sinister touches plucked from death and black metal sanctions. It's the decorative solos from Allan Poulsen and Peter Nordahn that counter the engulfing ugliness of "The Sovereign". The juiciest of them all is the one splicing the slinky and gruesome "Human Game". Smart that FEROCITY retains these ornate moments amidst the blaring haplessness of this noisy trip. The pairs of robust guitar solos on the title track shines tiny beacons of hope amidst the song's suppressive bombast. The trade swarming from Poulsen and Nordahn overtop the choruses of "And the Rest is Silence" and the harmonious intro to "XIIth Legion" are a couple traces of melody carried over from the "Cocoon of Denial" days.

The main hindrance to "The Sovereign" is that the same core set of riffs are employed, then manipulated along with the always-shifting beat patterns, which ultimately leaves a worn-out feeling. At least "Blind Disciple" interchanges between grind and a slower dirge section which allows the band to deviate from the same gray static palettes utilized most of the way. The hallucinogenic instrumental "Abrupt Desolation" is a much-needed pause from the continuous onslaught of the rest of the album. Then the skidding sounds along the guitar frets on "No Rest for the Wicked" (the album's best-written track) initiates a crawling, twisted sense of depravity that's given a methodic treatment of alternating currents between power chunks and grind.

The final analysis is that FEROCITY's restructured stacks of mucky esophagus blares and hyper-extensive beat structures from the dexterous Nikolaj Kjaergaard gives them a new identity for which they'll likely be rewarded . Yet something seems compromised in transition. While "The Sovereign" is impressive in many ways, it also seems no more unique than any other death metal squad bludgeoning every ear canal within reach.