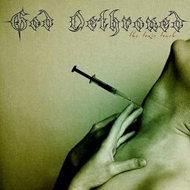 Holland's GOD DETHRONED have been on a roll these past several years, even with a lineup change that saw the group losing half its membership prior to the release of 2004's stupendous "The Lair of the White Worm". The quintet, led by mastermind and vocalist/guitarist Henri Sattler, progressed into a decidedly more melodic death metal style with 2003's "Into the Lungs of Hell" and made a big leap with the killer hooks and blistering solos of Isaac Delahaye on "The Lair of the White Worm". The band has unequivocally found a comfortable groove with "The Toxic Touch". The tunes remain catchy, the delivery aggressive, and the overall product quality melodic death metal.

An ominous tone is set with brief intro piece "Faithless" and explodes with a memorable shout-worthy chorus and pounding attack on "Hating Life". Following up with a classic GOD DETHRONED up-tempo and catchy crusher called "2014", it becomes immediately apparent that the decision to go with an unknown producer and studio in Jorg Uken and Soundlodge, respectively, was a good one. The riffs are big and menacing, the rhythm section powerful, and the overall sound one that is polished, but not overproduced. And aside from the mediocre "Falling Down", songs like "On Wings of Pestilence" and the chilling "Typhoid Mary" are simply outstanding. The album pacing is superb as well, as the band knows when to blast, when to groove, and when to let a song breath (check out "Macabre World" for a fine example). Even instrumental "Away from Emptiness" fits perfectly, Delahaye's heartfelt solo especially notable. The use of light keyboards to create atmosphere on "Typhoid Mary" and "Macabre World" works nicely as well.

Considering the exceptional drumming of Arien Van Weesenbeek, the guitar work of Delahaye, Sattler's intelligible mid-range growl, and a knack for writing strong hooks without tempering aggression, to say that GOD DETHRONED is now firing on all cylinders would be a gross understatement. This is a band that more people need to know about. You simply cannot go wrong with "The Toxic Touch".