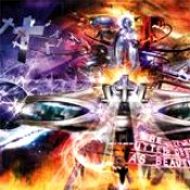 The Voyeurs of Destruction

I've had the pleasure of having "Voyeurs" for well over a year and a half. So, some of my observations are how well this release has held up for me, but I'll still try and tell you what it "sounds" like, which is the toughest part of any review, especially this band. They put the middle finger in the air, and just make metal. This is a wild mix of metal, at times progressive, a splash of doom, some thrash thrown in, atmospheric touches making you think "black" metal, a little death, a tiny bit gothic. You name it, it probably made it into a song or two. However, this does flow nicely. It's not a case of "name that genre," because this ("Voyeurs") has no real genre, other than being in-your-face metal. Slow, fast, candid and passionate, twisting and turning, eerily catchy, creepy keys are used for both melody and atmosphere, strictly stark, warmly inviting, moody and aggressive, endearing, hostile and confusingly rewarding. PURE SWEET HELL is the ultimate metal chameleon.

Van Williams of NEVERMORE is the drummer here, and since he's one of the top drummers out there, you know that you're in for quality. Expect nothing, and you'll get everything, since he's so tightly synchronized, and wildly venturous. His vocals are fully understandable on first listen, so you can fully appreciate the lyrics immediately. But the vocals do dominate "Voyeurs", with effects on them to propel and make them even more threatening than they are. Ripping, snarling, torturous, truly beastly and utterly disturbing. You know, on first listen, you've never heard vocals like these before. Before you think this is just a different take on "death" style vocals, the backing vocals will send you head first into a trip. Van can sing, I mean, sing! You'll hear bits and pieces backing the songs. Jim Colson, second vocalist and old friend, adds depth and emotion to several songs, his powerful delivery really helps slam the music home. Now, the other component to PURE SWEET HELL is Christ Eichhorn, who does the guitars, bass, and the songwriting. Put these guys together, and you're offered an extremely cohesive effort. Friends from way back seem to be able to read each others minds, and they indulge each others metal whims on several of the songs. Guitars are strong, balancing the songs, supporting them, occasionally carrying them. You'll catch glimpses of a doomy vibe, hard grooving chunk, at times malicious, highly emotional. Long extended notes with this amount of emotional weight carry this miles. The tempos of all songs are different, with a few samples mixed in for intensity, with each song ranging from fairly short, to one over six minutes.

1) "Innocence and the Beast": If you got the demo from 2002, this will be the only song that even remotely resembles that recording. This one is a total set up for the rest of the disc, with the guitar grooves being subtle, yet have a grave digging scoop feel to them.

2) "Scared About Everything": Sinister vocal delivery, with distortion to emphasize the right parts. Short song that's memorable for its faster parts, as well as those backing vocals.

3) "Golgotha on my Mind": Excellent dual-vocalist take on this song. The lyrical lines of Jim Colson are of faith lost, delivered with power. The snarling, spitting harshness of Van balances it out. They reflect off of each other easily, with a good-versus-evil duality. The song reaches chaotic proportions, with excellent drum tracks.

4) "Swallow": Unruly, with excellent grooves going on. Keeps you off balance, especially the frenzied end.

5) "Undone": The most doom tinged song on the whole disc. Slowly grinding along with heavy riffing; breaks of faster paced passages bashes this around building momentum, till the long drawn out fully metal ending.

6) "Gehenna": Jim starts this off with his beautiful voice, accentuated with a marching-like drum pattern. Van's regular singing voice takes over many long verses, until his nasty vocals take the song and beat the shit out of it. This one has a trippy tribal pattern in the drumming, making you envision wild and naked women (men for me, thanks) slithering around.

7) "Hangfire": Jim adds what I swear is almost a hard rock delivery which is very catchy. Van adds his harsher elements, with hard chunks going on with the rhythm section. Makes the shoulders sway, and the head nod with approval.

8) "Rave Song": Utterly disturbing. Boredom seeks an exit (victim?),only to encounter more boring individuals. The programmed intro makes this sick. The distorted vocals spit and spew warnings, the music builds up and slows down with no rest.

9) "Take Away": Just a nasty motherfucker once it gets rolling. The minute mark is where this turns into a raging beast. Pummeling drums, rhythm guitar that punctuates everything, vocals are demonically driven, and possibly the most intense on the disc as a whole.

10) "The Killers": If I had a left nut, or a right one for that matter, I would gladly give it hear this live! It's one of the most striking songs on the disc. Lyrically/musically it will suck you in — the grooves, chunk, time changes are all the elements needed to make your body move.

11) "What Your Pain Is": Haunting intro, with heavy riffing balanced with lyrics of revenge.

12) "Beautiful Suicide": Intense song, with parts being chaotic, heavy, and reflecting the hefty burden of the lyrics. "You only feel in disease — your wasted life — the one you try to hide….your life exists inside a peephole…."

13) "Dr. Death": Haunting keyboard intro, emotive and beautiful guitar work, many break downs, buildups to the solo, with a spoken piece by Jack Kevorkian mixed in. This one hit me in the guts, had me spellbound, and while laid out differently than other songs, it's going to affect you one way or another. I truly love the guitar work in this song.

Brutal Truth: One Van on the mic equals two other men, so expecting an outstanding vocal bombardment is wise. Jim Colson, as I already said, adds this soothing and powerful touch, warming "Voyeurs" up. I have listened to this more times than I can even count, and it still holds up strongly. Try it, you might enjoy this frustratingly rewarding metal release.