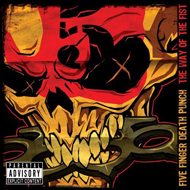 The Way of the Fist

The world can sleep easier tonight, now that one of history's burning questions has been answered: what would a supergroup comprised of former members of W.A.S.P., U.P.O. and MOTOGRATER sound like?

I know, I know — the guy who just gave DEVILDRIVER a great review can't be throwing rocks at anyone for what bands they cut their teeth in, right? The thing is, though, that FIVE FINGER DEATH PUNCH (quite possibly the gooniest tough-guy band name since BRICK BATH) actually sounds like a group of burned-out former contenders who, by trying too hard to come up with something that fits in to the current scene, ended up creating instantly-dated parody metal that's a day late and a dollar short.

"The Way of the Fist" comes off like a dumbed down metalcore-for-dummies rehash, with some Gothenburg-by-way-of-SHADOWS FALL's-trash-can faux-thrashing for credibility's sake, and some regurgitated SLIPKNOT minus the extra percussion and any sense of freshness or innovation. Ivan Moody spits out cliché after cliché in either an adenoidal wrestler's bellow or an overwrought and formulaic clean bleat (in every chorus, like clockwork, of course),while former U.P.O. man Zoltan Bathory churns out riffs so rote and generic they'd make STATIC-X turn away in shame. 1999-era gimmicks abound — check out the quiet-then-loud lead-in to the breakdown in "White Knuckles" for a little dollop of nu-metal hell, as cheesy as you remember it. Oh, and don't forget spat-out pearls of wisdom like "step to me, step to me motherfucker!" and "one two fuck you" — suburban angst from the Early Durst-acean Era that reek of staleness now. About the only thing these songs have going for them are occasionally noteworthy guitar solos, and even those might just sound good because they're a break from the dumbed-down chugga-chug and Moody's sophomore-blog posturing.

FIVE FINGER DEATH PUNCH are a band destined for perennial C-list status, the sort of group whose album sounds a decade old the week it comes out, and one who might eke out a modest career tooling around the country eating the exhaust from KITTIE and BOBAFLEX and DOPE's tour RV's, somehow hoodwinking even more clueless local bands into selling tickets to open their gigs. A crass failure from a bunch of dudes who've apparently learned nothing during their time in the music business, least of all how to have a personality.