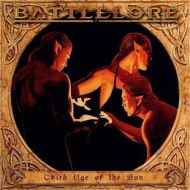 Third Age of the Sun

They may look like a junior-league theater troupe at a parking-lot Renaissance faire, but BATTLELORE are all business when it comes to creating enchanting, Tolkien-inspired medieval metal with a groove. Similar in sound to (but less complex and mystical than) Holland's ORPHANAGE, BATTLELORE mix tasteful Euro-metal with death and female vocals, atmospheric keyboards, and lilting melodies of old European times.

"Trollshaws" is the cut to check out for the most all-encompassing BATTLELORE sound — the female and death vocals duet throughout most of it, while piano, flute and Gregorian backing chants flesh out a fairly traditional swords-and-wizards metal stomp. A creepy Gothic Gollum croak accentuates the song, and the interplay between the three voices makes the song memorable (that same croak, atop an acoustic interlude, ruins album closer "Gollum's Cry" with unintentional hilarity).

Elsewhere, BATTLELORE isn't afraid to go for the overtly melodic, as on ballad "Elves of Luva". "Valier – Queens of the Valar" could appeal to NIGHTWISH or EVANESCENCE fans, with its stately tempo and infectious melody. To their credit, though, BATTLELORE infuse even their most catchy material with at least a few choice death metal vocals, plus their single-minded devotion to Middle Earth and its denizens. Can you imagine a radio programmer giving a serious second look to a song called "Valier – Queens of the Valar"?

Nonetheless, by underground metal standards, this is pretty ear-friendly stuff. Fans of NIGHTWISH, ORPHANAGE, and anyone who wondered what it would sound like if LACUNA COIL scored "The Lord of the Rings" will enjoy BATTLELORE. "Third Age of the Sun" may be a bit odd and obsessed, but it's an enjoyable, accessible, multi-faceted album with plenty to recommend it.