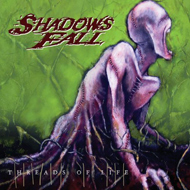 Will there be a metal release under more of a critical microscope this year than the new SHADOWS FALL? The band is, tangentially at least, tied to a metalcore scene that's seen as glutted and past its expiration date. And they're making their major-label debut after slogging it out for years at the indie level, with a producer whose credits include bands like FOO FIGHTERS. Never mind the years of hard work and no-hope gigging these guys did in the trenches; if the wind is right, you can hear the sound of the self-appointed guardians of metal cool sharpening their carving knives for this one.

And here's the thing — "Threads of Life" is slick. It's slick as all hell. From the chunky, muted rhythm guitars to the punchy drums to the smooth-like-buttah multi-tracked wall-of-vocals choruses, the bigger budget shines through here. There's an immediacy to the songs on "Threads of Life" that the band seemed to be trying for before, but lacked either the skill or the time to fully realize. You can almost feel the conscious restraint when the drums leave room for the vocals to take center stage — it's a lack of sonic clutter, a decision of what to put where sonically that makes things sound almost… orderly.

But give it a few listens, past when the choruses sink in and the genial rockin-ness of the album as a whole settles with you. Put the headphones on and really listen — there's a lot going on here. Take opener "Redemption" — the guitar lines twist and squirm like writhing animals, never content to settle into mere "riffs," endlessly tossing out bits of ear candy under the surface even when the vocals are going full-blast. And the soloing! There's some serious old-school guitar hero shit going on here, the kind of playing that's going to inspire a big chunk of MySpace-surfing thirteen-year-olds to head for the guitar shop.

All this talk of ear-friendliness may cause some to worry about heavy moments, but there are still plenty of mosh-worthy bits on "Threads of Life". "Failure of the Devout" is a thrash monster with nary a clean vocal in sight, and only an acoustic intro right out of 1990-era TESTAMENT to offset the crunch. Even a more midtempo song like "Venomous", where Brian Fair sings in a more tuneful, Hetfield-ian rasp and the drums propel the catchy riff urgently along, the overall effect isn't lack of heaviness. It's more a newfound confidence and professionalism, if that makes sense, a more forceful presentation that puts these admittedly more accessible tunes over. The band has hit that very elusive line between broadening the appeal of the music and selling out completely – talk about the art of balance!

Despite its '80s thrash ballad feel, I'm not 100% sold on "Another Hero Lost", but the rest of "Threads of Life" is chock-full of memorable songs, impassioned performances, ripping solos, and vocals you'll be singing along to for months to come. SHADOWS FALL have created a record so perfect for this time in their career, so well-executed, its seamlessness almost makes it look too easy. Don't fret, scene police – this is the same band you fell in love with in the underground, only better.