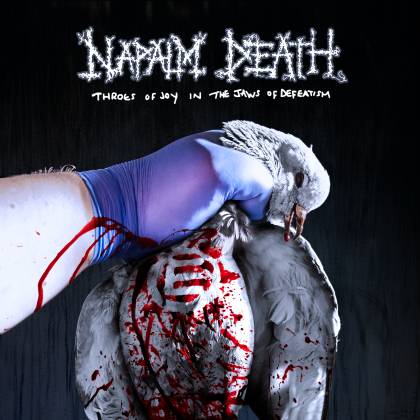 Throes Of Joy In The Jaws Of Defeatism

01. Fuck the Factoid
02. Backlash Just Because
03. That Curse of Being in Thrall
04. Contagion
05. Joie De Ne Pas Vivre
06. Invigorating Clutch
07. Zero Gravitas Chamber
08. Fluxing of the Muscle
09. Amoral
10. Throes of Joy in the Jaws of Defeatism
11. Acting in Gouged Faith
12. A Bellyful of Salt and Spleen

It has been five years since NAPALM DEATH released its last album, "Apex Predator — Easy Meat". The longest period between their releases is finally over, as the forefathers of grindcore have returned with their sixteenth full-length release, "Throes of Joy in the Jaws of Defeatism". The passionate, sociopolitical outlook of frontman Barney Greenway and company was inevitable and almost seems requisite in the face of the current state of global turbulence. The wait has been worth it, to say the least. "Throes of Joy in the Jaws of Defeatism" is the best album the Birmingham bruisers have released in years, if not their entire career.

The album touches upon the various eras of the band's storied career. It's overflowing with the rapid-fire intensity that's simply inherent to who they are and references their more industrial-influenced and experimental periods (think 1994's "Fear, Emptiness, Despair" and 1996's "Diatribes"). "Acting in Gouged Faith" is a barrage of blasting and barking, occasionally offering reprieves by way of d-beat groove. Album closer "A Bellyful of Salt and Spleen" lumbers forth with an industrial and goth groove as well as the clanging dissonance of EINSTÜRZENDE NEUBAUTEN.

As they've progressed from album to album, each step has made sense. But "Throes of Joy in the Jaws of Defeatism" isn't merely an extension of a relatively recent album like 2012's "Utilitarian". The new album entails the key aspects and qualities of older releases, and has actually increased the frantic nature of its approach whilst simultaneously and paradoxically serving the onslaught with a methodical and precise sense of purpose. The shards of the seemingly random fracas piece together into a whole that ultimately makes sense. "Throes of Joy in the Jaws of Defeatism" is chaos theory put to music.

Bassist Shane Embury wrote the vast majority of the release. Mitch Harris, who has been living back in the US for several years now, flew to England to record guitar parts; while live guitarist John Cooke contributed some guitar tracks as well. Embury's passion for multiple musical styles inevitably affected the songwriting. He has mentioned previously that he would simply be bored writing the same album repeatedly, and "Throes of Joy in the Jaws of Defeatism" is anything but more of the same. "Contagion", for instance, offers obnoxious and relentless grind that periodically makes way for a jangly noise rock-styled chorus section. Elsewhere, the guitars soak through a distant, echoey effect on the punk-ish "Joie De Ne Pas Vivre". And the mid-paced, avant-garde rock of the single "Amoral" finds NAPALM DEATH drawing heavily from its longtime appreciation of KILLING JOKE. "Amoral" has been met with adoration on one side, mudslinging on the other — depending on who is spouting off on social media.

Grindcore purists, craving carbon copies of NAPALM's earliest work, can be some of the most stubborn in all of music, but NAPALM DEATH has already written "Scum" and "From Enslavement to Obliteration". Mindlessly serving old food to this base would be easy. That would be "selling out." Embury and company have stood the test of time because of their legitimate passion for music, creativity and reaching toward uncharted waters. That's why we now have an album as beautiful and powerful as "Throes of Joy in the Jaws of Defeatism".