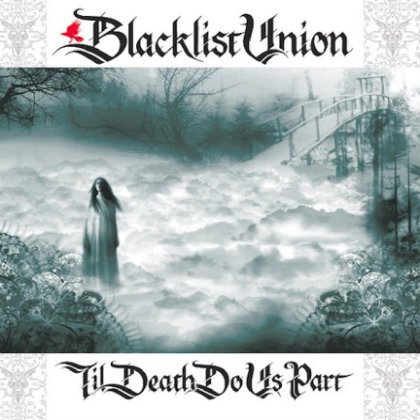 Til Death Do Us Part

They say the best form of expression stems from experience, which is never truer in the writing and recording arts. Former L.A. GUNS singer Tony West has a few things to say on the third album under his BLACKLIST UNION project, "Til Death Do Us Part". So do a lot of singers, sure, but West taps into his L.A. GUNS tenure aside from his songwriting alliances with Anthony "Trouble" Valli (formerly of CRAZYTOWN) and Todd Youth, who's been found in the company of notables ranging from Glenn Danzig to Glen Campbell. Amongst West's stable of guest players are Paul Crosby, Wayne Swinny and Dave Novotny from SALIVA, LOVE/HATE guitarist Jon E. Love and even a guest appearance from former TIN MACHINE/David Bowie drummer Hunt Sales.

"Til Death Do Us Part" has enough rock firepower to give Tony West all the amplification he needs to make his third time a charm for BLACKLIST UNION. At times West throws out shades of FILTER's Richard Patrick and JANE'S ADDICTION's Perry Farrell on this album, but the straight-up pounding at his back gives West all the canvas he needs to bleed his fallen angel vocal pitches onto. On "Same 'Ol Pressure", West throws down by quipping "So U wanna know all about my life? U either want my cash or wanna fuck my wife". It doesn't get ballsier than that, and "Til Death Do Us Part" is a big-sounding rock record without the slicked-up overproduction. It's not quite as naked as West's lyrics, but there's a subliminal raw edge to the music that makes them grabbers in most cases.

Instead of sobbing through feeling-jilted numbers like "Alabama Slammer", "I Do", "I Don't Love You Anymore" and "Blown Away", Tony West uses toughened yet empathetic tones to his delivery where these songs can belong to anyone, much less himself. As he attacks posers and status clingers on "Feed the Snakes" and "Diggin' 4 Gold", his venom is surefire yet handled with confidence instead of spitefulness, malicious as calling out "the gossips 'n the flakes" and "the 2-faced and the haters" may ring. "Game Over" summarizes seduction in a concrete yet abstract manner to the point West could be ranting about anything and everything from sex to substance abuse to the allure and unfulfilled promise of rock 'n roll superstardom.

"The Lick Kitty Split Theme Song" is the heaviest number on the album, smartly finding a way tread close toward contemporary AOR while keeping a muddy crunch beneath the sleazy riffs to avoid selling itself out. By contrast, the title track is the darkest song on the album with propositions of checking out, however the listener constitutes it. It's a gloomy number with somber riff patterns, but West ditches the maudlin tones in a hurry once "Alabama Slammer" picks up the pace with a much happier sound. Coupled together, one could interpret the succession of these songs as making the decision to kick the demons to the curb and embrace the future. Point further made on "Blown Away", which begins as a creeper and re-assumes a heavy-hearted ambiance. However, West posits to his listeners to "enjoy the ride of life" while there's time before he and his players whirl out the sweaty drives of "Same 'Ol Pressure", "Diggin' 4 Gold" and "Feed the Snakes".

The cover of INXS' "Don't Change" from "Shabooh Shoobah" is fielded with reverence, stripping down the denser layers of the preceding songs and serving reminder that INXS was a heck of a good rock band before their future turmoil. Given the themes of the songs surrounding it here, "Don't Change" seems to fit right in accordingly.

If Tony West was trying to purge with "Til Death Do Us Part", then consider it done in productive fashion, so much the album at-times sounds like a party more than a bitch session.