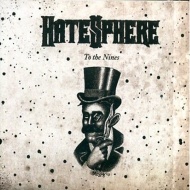 Not to be outdone by their fellow Scandinavians, Denmark thrash assembly line HATESPHERE has cranked out six full-length albums of that sort of melodic death/thrash that everyone comes up with a different truncated name for, and then gets pissed off when someone else misuses their linguistic bastard. The fact is, if you're one of those people who got into THE HAUNTED around "The Haunted Made Me Do It" and you keep wondering why every band doesn't stick with that intense, head-down thrash attack all the time, then HATESPHERE is probably the only band you still swear allegiance to.

It's telling that, like EXODUS, HATESPHERE wound up losing almost its entire lineup but has come back with the same sort of sound they'd have cranked out otherwise. At this point, it's more a franchise than a band, founder "Pepe" Hansen delivering ever-more-focused laser beams of melothrashodeatho-whatever with plenty of grit, venom and atmosphere to spare. There's nothing remotely surprising about any of it, and that's definitely the point — if you're looking for experimentation beyond the occasional mid-tempo song or keyboard-accented slow doom interlude, seek elsewhere.

But if innovation is out the door, quality is ever more at the forefront - just check out "Backstabber", as perfect a four-minute slab of nimble riffery, thrashing tempo and blistering soloing as you're likely to find. And the band's sense of dynamics is working in their favor, too — note how the trad-thrash barnburning opener of "Even If It Kills Me" is offset by the slower, stuttering exit to "Clarity", giving the faster bit more impact. And if "The Writing's On the Wall" isn't the video track, it damn well ought to be — a scandideathrashnik (okay, I'll knock it off) masterpiece that bulldozes any naysayers with sheer percussive intensity and downpicking fury, offsetting the grim-jawed midtempo brood of the seething "Aurora".

"To the Nines" is so short as to barely qualify as a genuine album, but Hansen knows his mission at this point — get in, thrash hard, and leave 'em wanting more. Even at this hyper-condensed level of panicked brevity, some moments fall flat here, where a few more distinctive solos or choruses might have put it over the top. But HATESPHERE certainly have nothing to be ashamed of with "To the Nines", and at times, they're so in-the-zone as to be positively godly. Well worth picking up for anyone itching for a riff-spitting, eye-gouging thrash fix that'll likely be over before you get home from the record store.