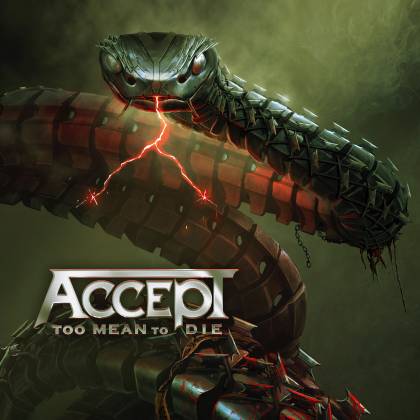 Too Mean To Die

At the risk of enraging a handful of purists, the original ACCEPT era definitely didn't produce a run of albums as strong and as consistent as the one the Germans have been on over the last decade. Okay, so virtually no one is capable of topping "Restless and Wild", but since the release of 2010's "Blood of the Nations", ACCEPT have simply clicked back into an imperious, contemporary gear, delivering a ridiculous number of gleaming, new anthems in the process. "Stalingrad", "Blind Rage" and "The Rise of Chaos" were all strong records, and thrillingly heavy ones too, with Andy Sneap's ever-razor-sharp production keeping everything sonically in the present day. It comes as no surprise, then, that "Too Mean to Die" is more of the same, and in the best way possible.

The formula remains the same, but perhaps with a little added ferocity to reflect the shitty times we live in. Frankly, it's hard to tell, because after an ominous, doomy intro, "Zombie Apocalypse" delivers the German heavy metal goods, and the listener is instantly snapped into the same grandiose but goofy world that ACCEPT made their own 40 years ago. Having a dig at the world's screen-addicted undead might not be the most startlingly original subject matter for a song in 2021, but it's got a massive chorus and, you know, it's called "Zombie Apocalypse". This is no place for cynicism. ACCEPT are the real thing and you either answer the call or you don't.

The hits keep coming, just as they always did. The title track is a none-more-classic speed metal ripper, replete with Wolf Hoffmann's expected fret-melting wizardry, and a deliciously unhinged vocal from Mark Tornillo. "Overnight Sensation" and "Sucks To Be You" fulfil the band's hard rock obligations; as irresistibly straightforward as you might expect, each boasts a chorus fit for stadiums and provides a neat reminder that ACCEPT were always the missing link between AC/DC and JUDAS PRIEST. As if anyone needed another reason to love them. Elsewhere, "The Undertaker" brings some shlock horror vibes to the proceedings, via gnarly, brooding sludge rock riffing and some ornate, symphonically inclined detours; "The Best Is Yet To Come" is a stirring but melancholy ballad with hazy shades of prog; "Not My Problem" is a snotty, blues rock spring to the finish; the instrumental "Samson And Delilah" offers a stately procession through sandblasted tombs, with Hoffmann letting rip, every fader set to "epic as hell."

And yes, it's worth restating: this is ACCEPT's fifth genuinely great studio album in a row. Nostalgia dictates that the old classics will always be the band's most revered creations, but in terms of building a new and equally enduring legacy, this 21st century incarnation have yet to place a foot wrong. Real heavy metal performed by experts, what more does anyone really need?