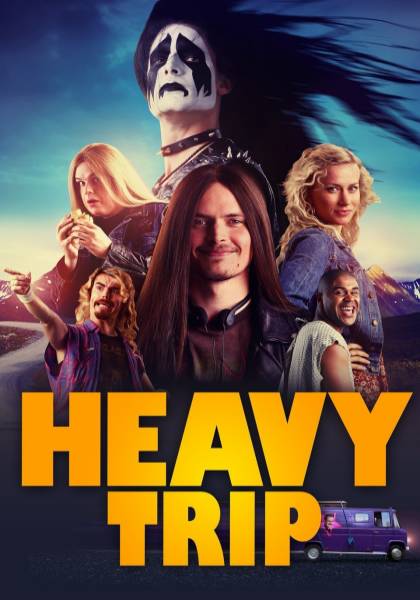 "Heavy Trip" has slowly built its following since its initial limited release in fall 2018, but the doors to a larger audience blew open the following year with its wider release on Amazon Prime. If you are a heavy metal fan that has been burned by other comedic movies that lazily treated the genre as a joke, rest assured that "Heavy Trip" not only provides an infectiously uproarious tale, but also treats its musical inspirations with complete reverence.

"Heavy Trip" is a tale of two approaches to comedic film writing. The first two-thirds of the film is a relatable tale of a death metal enthusiast (Turo Moilanen, played superbly by Johannes Holopainen) who is rotting away in his tiny Finnish town well into his twenties, forever feeling lovelorn for an old high school classmate (Miia, played very charmingly by Minka Kuustonen),and jealous of the local celebrity, a lounge singer whose audience is lonely divorcees around the region. Turo's only escape from the mundane doldrums is his duty as lead vocalist for a ragtag death metal group populated with fellow misfits of equal stature (or more appropriately, lack of). The band has never left the basement, but a chance encounter with the promoter of a Norwegian heavy metal festival inspires the group — now dubbed IMPALED REKTUM — to take its stab at leaving home.

The writing/directing duo of Juuso Laatio and Jukka Vidgren do a fantastic job infusing a potentially clichéd tale with earnest heart and relatable characters. Every member of the band has their own individual charms, while also being united in their quest for something greater than small-town Finnish life. Turo's shy vocalist is complemented by everyman guitarist Lotvonen (Samuli Jaskio),the walking Encyclopedia Metallium that is bassist Pasi a.k.a. Xytrax (Max Ovaska),and slovenly-but-lovable drummer Jynnky (Antti Heikkenen). Laatio and Vidgren showcase the daily rut that all members of the band are trapped in, from the listlessness of day jobs to local townsfolk teasing Turo for being a long-haired pretty boy. This isn't to say that the first sixty minutes of the movie is depressing though, as there is plenty of sharp humor and wicked laughs to be had.

But that grounding in reality makes the broadly played closing stretch of the film more hilarious. The second half of the band's journey sees an incredible chain of events occurring, with the band embarking on forays into grave-robbing and run-ins with military police on their quest for heavy metal glory. The transition from the tiny world built during the first part of the movie to the grand sequences of the final act is a bit jarring initially, but the ride is fun once you embrace the insanity that is now occurring.

The movie is executed in a way that would please even casual filmgoers, but if you are reading this site, you are probably wondering how the actual music is treated. Laatio and Vidgren do a great job delicately balancing the more humorous aspects of heavy metal fandom with a sincere love for the genre. It's easy to laugh at Pasi describing the band's music as "symphonic post-apocalyptic reindeer-grinding Christ-abusing extreme war pagan Fennoscandian metal," but there is nothing half-assed about the musical approach. The pounding riffs, blastbeats, guttural vocals, and lyrics that drive IMPALED REKTUM's original songs — written by Laatio — are delivered with loving brutality by vocalist Eemeli Bodde (MORS SUBITA) and guitarist Mika Lammassaari (also of MORS SUBITA and WOLFHEART). The movie's sound is given additional metal credibility by incidental music from STRATOVARIUS bassist/composer Lauri Porra. There is very much a sense of authenticity to the music that lends extra weight to the band's cinematic journey.

If you have yet to take the journey presented by "Heavy Trip", the film is now readily available on Amazon Prime for you to headbang to and laugh at simultaneously. There is plenty of both to be had.