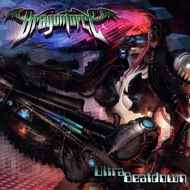 Did DRAGONFORCE's "Inhuman Rampage" really sell 300,000 copies? I'm stunned, and not because I think the band's extreme/melodic power metal isn't worthy; it's just that I would have never imagined any strain of power metal meeting with that level of sales success. Regardless, as indicated in my review of "Inhuman Rampage" on this site, when it comes to DRAGONFORCE metal, I can pretty much take it or leave it, though I certainly acknowledge the quality of the material (hence, the 7.5/10 rating.). Additionally, I will admit to finding a new appreciation for the band's blindingly fast, shred-worthy style as of late, even though I may never be a huge fan. Digressions aside, when it gets right down to it, "Ultra Beatdown" is the logical follow-up to "Inhuman Rampage", some might even call it "Inhuman Rampage: Part II".

The diehards are sure to find a level jump in songwriting or technical nuances of the kind that only the most dedicated of the DRAGONFORCE legion would be capable of pointing out. But when "Ultra Beatdown" is viewed from a broader perspective, most will find that it is an album on which DRAGONFORCE continues to do what it does best: write and perform lengthy compositions that are heavy on the shred (and impressively so) with gargantuan choruses that are catchy as hell. "Heroes of our Time" is the prime example; boasting a chorus that is right up there with "Through the Fire and the Flames" (from "Inhuman Rampage"). As always, there are tons of instrumental sections that will drop jaws and make folks utter "holy shit!" Just listen to "Reasons to Live" and "Heartbreak Armageddon", the latter notable for its contrasting sections of furious-tempo/mind-blowing solos and laid-back-pace/sweetly-tuneful leads.

While the style is no big leap from what was heard on "Inhuman Rampage", it should be noted that the keyboards of Vadim Pruzhanov are particularly well-played this time around. His colorations seem to make a bigger impact, especially on a track like "The Fire Still Burns".

With the exception of a mediocre balled ("A Flame for Freedom"),the album is quintessential DRAGONFORCE from start to finish. If ever there was a case where fans of a group's last album are guaranteed to remain staunch supporters upon listening to the new album, it is "Ultra Beatdown". As the saying goes, if it ain't broke, don't fix it. It is indeed a truism that nobody does it quite like DRAGONFORCE.