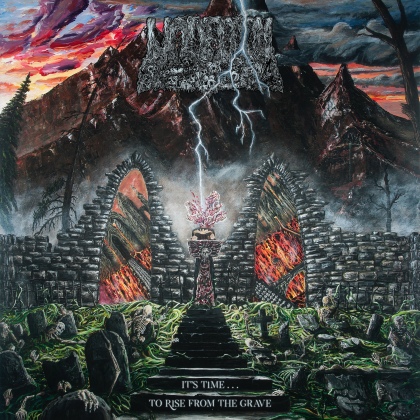 It's Time… To Rise From The Grave

These are heady days indeed for fans of death metal. Some may question the value of the genre's ever-expanding diversity, but few would argue that we are experiencing anything other than a new golden age. Pleasingly, for old bastards at least, it is the defiantly uncommercial, old-school wing of death metal that seems to be the healthiest of all, virulent bouts of sonic leprosy notwithstanding. UNDEATH blew lots of people's heads off with their 2020 debut "Lesions of a Different Kind", as this Rochester, New York quintet demonstrated an instinctive disregard for repeating the past; eschewing old-school cliches in favor of a highly evolved hybrid of sludgy primitivism and Florida-style technicality that resounds with the spirit of the Ancient Ones. Two years on, "It's Time… To Rise from the Grave" delivers on its title's promise and makes the same, jaw-shattering point as its predecessor, but with even more unholy power and bone-crunching intensity.

An opening track with sharp teeth, "Fiend for Corpses" smashes the door down with as little subtlety as possible. UNDEATH had their loose-limbed, deathly attack nailed last time around, but thanks to a combination of stronger production values and sharper songwriting, "It's Time…" has a haughtiness and arrogance about it that the debut barely touched upon. Everything here connects, from the mid-paced mutiny of "Necrobionics" and the MORBID ANGEL-saluting "Enhancing The Dead" to the outright, lobotomized carnage of "Funeral Within". The angular, CANNIBAL CORPSE-like "Head Splattered in Seven Ways" is a particular high point, as UNDEATH rattle through the gears, from a scorched-rubber full pelt to eviscerating, slow-motion pummel. Equally great, "Bone Wrought" is a wickedly succinct collage of riff-based horrors: a sub-three minutes master class in keeping the best riffs and employing them in a single, suffocating hit. In fact, UNDEATH have an eerily high strike rate when it comes to enormous, life-affirming (and death-confirming) riffs. Ultimately, fans of the real thing will know what's going on here.

"It's Time… To Rise from the Grave" does not strive to reinvent the death metal wheel, but it is more than happy to jam a few dismembered fingers into the spokes. A timely and top-class (un)demise for all concerned.