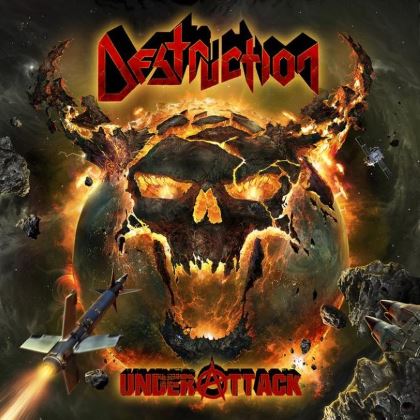 Lemmy is dead and it still hurts, but what a year 2016 is shaping up to be for classic thrash. MEGADETH and ANTHRAX already dropping two respective highlights this year, right behind them comes the mighty DESTRUCTION with "Under Attack", a glorious thrash monster that might be near impossible to beat.

What Mike Sifringer and the band was attempting to tap into during the 1990s awkward “Neo-Destruction” period (i.e. "Cracked Brain" and "The Least Successful Cannonball") rang of instant failure and the brief departure of bassist/vocalist Marcel "Schmier" Schirmer. Decades later, a reconciliation of that problematic era finds Schmier and Sifringer taking a few minute risks in the attempt to dress up "Under Attack" a bit. This time, the gamble pays off huge. "Under Attack" is thus one of DESTRUCTION's best efforts, yielding marvelous groove, harmony and progressions while retaining DESTRUCTION's trademark brutal force. When "Under Attack" thrashes (and it's for most of the ride),it's like bearing witness to the fore of a hurricane. The rest of the album's dynamics are comprised of ingenious craftsmanship befitting of thrash legends bolting with shoulders squared into their thirty-third year.

The album opens impressively with the exultant title track, the first two minutes of which are encompassed by a sweeping instrumental. At that point Schmier screeches into the raging tempest DESTRUCTION beckons. The combo mosh-thrash means that "Under Attack" delivers remarkable groove and an awesome melody swirling about the clobbering velocity. Not a lick of this enormous 6:13 cut is wasted.

The rush hardly settles through "Generation Nevermore". If anything, the riffs grow even more encompassing while sustaining the catchiness of its predecessor. Mike Sifringer, one of metal's criminally unheralded fret masters, torches his strings with a searing peal and ransacks his solo as if to say: “Hey, speed freaks, remember me?” Sifringer remains one of the most consistent shredders this scene has ever seen. He and Schmier, as longtime partners, lob chords and strip bars by natural instinct. "Dethroned" drops the pace to mosh mode, and it's easier to hear Sifringer and Schmier bob up and down as Wawrzyniec "Vaaver" Dramowicz plants them an unruffled, if forceful beat to pump their chords by.

"Getting Used To The Evil" is another six-minute excursion, scaled down in tempo but superbly written. Mike Sifringer's harmonious guitar spirals give the song a deceptive calm despite Vaaver's stiff clomps. "Getting Used To The Evil" naturally grows crunchier along its slogging course, but DESTRUCTION's veteran songwriting skills come into play with clever variations altering the song's mood at will.

"Pathogenic" and "Second to None" will leave thrashers giddy within their blitzing wakes, while the political jibes gnashing behind "Elegant Pigs" in-between them are given enormous descant by some of the album's coolest riffs—keeping in mind "Under Attack" delivers riffs and guitar heroics like they're on a fire sale.

If the new MEGADETH and ANTHRAX albums provide hope American thrash is far from dead, DESTRUCTION proudly barks their case from Deutschland as decisive victors. The rally anthem "Stand Up For What You Deliver" is a song that unifies in sound what the American and German Big Fours have collectively accomplished and there's a subtle beauty to it. "Conductor of the Void" capitalizes on this momentum by chugging with potency on DESTRUCTION's galvanized rails, unafraid of taking a few chancy signature curves—all of which swerve effectively.

"Under Attack" is an instant classic, possibly one of thrash's greatest genre pieces ever. Being a heritage band does have its advantages.