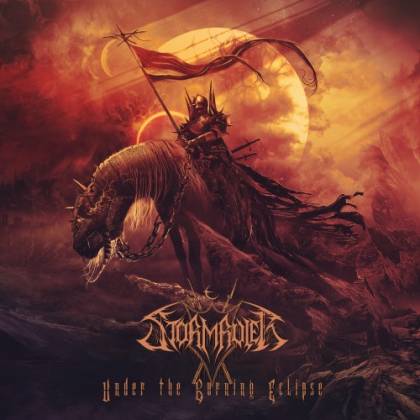 Under The Burning Eclipse

A two-man band featuring certified, virtuoso US death metal heads Jason Asberry (vocals/guitar) and Jesse Schobel (ex-SCOUR, drums/vocals),STORMRULER might give the impression that their debut album is an elaborate affair, not least due to its daunting 19 tracks. In reality, half of those songs are brief, instrumental interludes, and "Under The Burning Eclipse" is dominated by skull-shattering, hateful and remorselessly icy blackened death metal, with a distinctly Scandinavian twist. Fans of NAGLFAR and DARK FUNERAL will instantly embrace the vibe of this thing, but it would be unfair to accuse STORMRULER of lacking a strong identity. As "Reign Of The Winged Duke" noisily confirms, this duo eschew black metal's instinctively ragged flow in favor of pitiless precision that slices and flays with the same ferocity as ANAAL NATHRAKH or MYSTICUM. Hurled into that already potent brew are finely honed, old-school metal instincts, which means that riffs come at the listener from all angles, evoking the bleak grind of CELTIC FROST at one moment, the melodic heroism of MAIDEN and PRIEST the next.

Asberry and Schobel's self-evident chemistry gives "Under The Burning Eclipse" a gripping sense of supreme focus. When they take an all-out war approach on "Age Of Steel And Blood", STORMRULER sound bigger and more powerful than any two-piece has a right to be. When they truly stretch out musically, on the labyrinthine rampage of the title track, they conjure a sense of otherworldly grandeur that seems to emanate from dark cracks in the prevailing barrage of blasts and screams. Meanwhile, the song's epic conclusion is gloriously metal as all unholy hell. Both similarly stunning, "Mark Of The Valkyrie" brings together some of STORMRULER's most extreme moments with some wildly imaginative ambience and riffs that pump seething steroids into the veins of second wave black metal; while "Fear The Old Blood" has got its old-school clobbering boots on and builds towards an authentically unnerving and hell-for-leather final fade that might as well be the sound of humanity being sucked down the plug-hole.

Throughout it all, those interludes add color, pace and presence to the album's unrelenting horrors. STORMRULER will fulfil all your malevolent needs, but there's method and myriad flashes of inspiration lurking in the murderous madness.