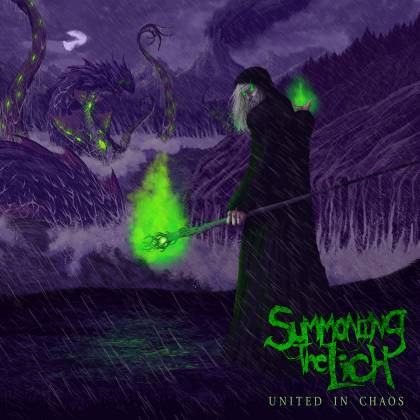 Even the most dedicated brutality fan would struggle to plough through everything that is released under the death metal banner. The modern, well-produced end of the DM scene is particularly guilty of churning out bands that sound identical to one another, but the upside of that scenario is that a band like SUMMONING THE LICH instantly stand out as something superior. This St. Louis, Missouri quartet make no bold claims to be reinventing the wheel on their debut album, but the sound of a band with (a) songwriting chops and (b) massive cojones is unmistakable.

If you want spectrum specifics, SUMMONING THE LICH owe plenty to THE BLACK DAHLIA MURDER, a little too early deathcore greats like ALL SHALL PERISH and DESPISED ICON and a generous amount, in atmospheric terms at least, to the storytelling malice of CRADLE OF FILTH. But these are comparisons available via any blank-eyed algorithm. The information you really need about "United in Chaos" is that it is gripping from start to finish, comically overstocked with lethal hooks and grand dynamic twists, and brilliantly thuggish and nasty in the best possible way. Production-wise, we have been here before many times, but SUMMONING THE LICH transcend their adherence to standardized sonic values with the sheer, joyous flair of their songwriting.

It's obvious from "The Nightmare Begins" that this is no exercise in aspirational box-ticking: with a grimy, hypnotic chorus and more than enough venom and violence to appease most blast-freaks, it's a ballsy and hyper-confident opening statement. From that point, it's wall-to-wall coffin-smashers: "Demon of the Snow" is a riot of razor-sharp riffing and theatrical horror; "Predatory Reflection" is a wicked, pummeling waltz into the endless deep; recent single "Descend" is an immaculate, four-minute fist-flurry to the ribcage, with frontman David Bruno sounding like eight people at once. Elsewhere, SUMMONING THE LICH further indulge their obvious penchant for horror (a lich, in case you were wondering, is an undead creature from fantasy fiction) on the vicious but fiendishly catchy "Hymns (of the Witches of the West)" and closer "The Lure of the Necromancer", which ends this blistering debut on its heaviest and most gleefully deranged note.

All it takes to refresh a formula is brilliant songs. SUMMONING THE LICH have seen the light, and "United in Chaos" deserves to be one of this year's most celebrated debuts as a result.