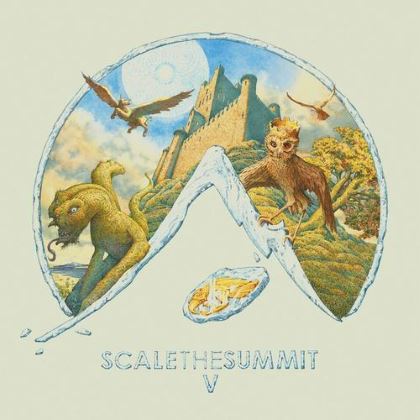 On a personal note, I'm happy to see how far SCALE THE SUMMIT has come over the years. They're proof positive of how far one can go from DIY to international acclamation. I received the band's self-released "Monuments" album back in 2007 as part of a grass-roots Internet campaign by Chris Letchford and Travis Levrier (and at the time, former drummer Pat Skeffington),who reached out to me then with barely a lick of an audience. SCALE THE SUMMIT has since toured alongside YES, DREAM THEATER, MASTODON, INTRONAUT and the DEVIN TOWNSEND PROJECT as one of the forerunners of contemporary prog metal.

This year, the band welcomes new drummer J.C Bryant and reunites with BETWEEN THE BURIED AND ME/THE CONTORTIONIST producer Jamie King for their latest album, "V". As ever, SCALE THE SUMMIT play at a high level of probing yet tuneful prog, but this time, they heavy up significantly.

"The Winged Bull" opens with a cheerful, ascending spool before striking the sound of a proverbial spreading of their airborne muse's extensions. Chris Letchford and Travis Levrier's guitars grow heavier and at times nasty until the third minute transpires and the band's knack for harmony breaks in with stately swirls. The meatier riffs return in the outro, thus creating a chockablock set of dynamics for "The Winged Bull", establishing a theme to "V" which is carried into the next track, "Soria Moria". SCALE THE SUMMIT musically declares their intent on heavying up this album with denser riffs and turned-up bass while retaining their core identity as melodic proggers. "Soria Moria"'s bulk and precision is impressive as a relative shadow to Steve Vai.

The emotive and playful "Pontus Euxinus" feels like it's going to drop back and wallow, yet the band craftily stiffens up Mark Michell's bass trundles and allows the track to lighten up no matter how tough the riffs get. "Trapped in Ice" afterwards is one of SCALE THE SUMMIT's most impressive songs ever as they catch the listener off-guard with a concussive intro led by J.C. Bryant's rapid pounding. Letchford, Levrier and Michell take cue by hammering the hell out of their instruments along with Bryant and "Trapped in Ice" becomes a smothering affair of riffs and scales until abruptly halting things and reeling a soft guitar lullaby to counter the first half's oppression.

Emerging from this serenity is a whispery guitar intro that morphs into a bass-heavy fusion jam on "Stolas" and the busy, if slow-rolling "The Isle of Mull". The latter grows fiercer by the section to the point tactical shredding becomes as much a dominant part of the songwriting as its decorative scaling.

Because of SCALE THE SUMMIT's heavier tones on "V", a song like "Kestral", which operates at a languid stroll much of the time, receives a huge push so the song's lucid aesthetics can peek out and blossom instead of worm for attention. The only time "V" doesn't blare is on "Oort Cloud", which drowsily yawns out of a gorgeous serenading intro, yet snaps to attention on the heels of J.C. Bryant's hyper fills. The layers Chris Letchford and Travis Levrier thread overtop Mark Michell are enough to concentrate on, yet Michell and Bryant have a ton to say in their own right until the band unites at the four minute mark and hits a melodic power prog swing.

The 7:05 "Blue Sun" is tremendous as SCALE THE SUMMIT hits the apex of their talents on this massive, scale-freaked journey, swapping increments of volume and whipping out more notes to chew on in some sections than even an orchestra conductor can process. As with previous compositions, SCALE THE SUMMIT dials back and harmonizes with soothing poise as set up to thicker progressions. Thus the heavier motif of "V" gives SCALE THE SUMMIT even more muscle than they came into this album with. As if they hadn't already hit their zenith four years ago on "The Collective".