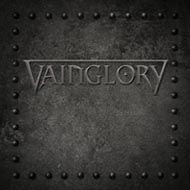 Tired of all the cross-pollinating 'core bands filling the shelves at your store of choice? How about a no-bullshit, traditional metal CD that relies on blazing riffs, shredding solos, and a go-for-the-jugular delivery to make its point? You just found it in VAINGLORY's self-titled second release. Guitar beast Corbin King and monster vocalist Kate French (CHASTAIN) lead this bunch, peeling out of the gates and not letting up until all that is left is a smoldering pile of deafened metal heads.

Sixty-six minutes seems a tad long, but it is mainly because many of the songs are in the five to six minute range. Even then, instrumental excess is kept to a minimum, the riff-choked songs fairly memorable and always heavy as hell. While "Vainglory" is not propelled by the same kind of thrashy, often TESTAMENT-sounding assault of a PAINMUSEUM, there are a few similarities in the way the fire burns dangerously hot (think in terms of a heavier classic metal sound that doesn't come off dated). Once you've made it through the explosive, flaying riffs and up-tempo delivery of album-opener "Walking Dead" (featuring one of the more memorable choruses),you've got a pretty good idea of what to expect the rest of the way. Well-placed melodic leads and thunderous double-bass make "Burdened" one of the better tracks as well. A bit of early PRIMAL FEAR is heard on a song like "Face of Death", the guitars especially sharp here. The band changes up the pace nicely on a few tracks, particularly on "Undying Love", a track featuring sections of spooky light picking and dark atmosphere that still boasts plenty of riff crunch and quicker tempos. Not surprisingly, an instrumental ("Decapitation Attack") is included, the raging track fitting in just as snugly as the rest of the material. Of course, King bleeds his six-string all over the album, but the effect rarely sounds pretentious or overdone. And French's vocals are just plain nasty and full of metallic intensity.

Fans of true blue heavy metal will find a lot to like in VAINGLORY's sophomore release. It is exactly what it purports to be: an aggressive, in-your-face heavy metal album. "Hard as iron, tough as steel" is the phrase that comes to mind.