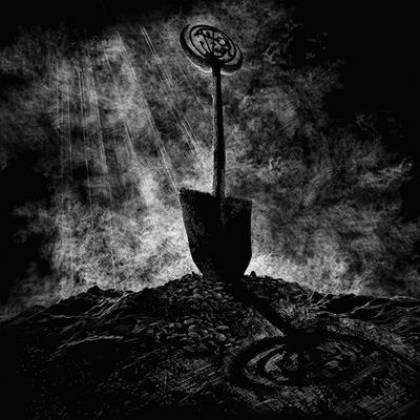 Metal and synthwave were clearly natural bedfellows from the start. There was something brilliantly fresh and exciting about the latter genre's emergence, too: those first few brutish PERTURBATOR records, the emergence of CARPENTER BRUT's hellish disco-rock and mind-ravaging visual flair and, in particular, everything that GOST have released so far. If you spend too much time digging into the synthwave scene (if indeed that's the correct name for it — take your pick from darksynth, dreamwave, scifiwave and several others, if you wish! — you will swiftly realize that most of it sounds like endless lobotomized re-writes of the KNIGHT RIDER theme song with loads of cheesy cock rock soloing thrown in, rather than anything remotely forward-thinking, exciting or heavy. Luckily, GOST are smarter than the average faceless laptop boffin and have already mutated and evolved beyond the vicious, pounding E(vil)DM of first three albums "Behemoth", "Non Paradisi" and "Possessor", expanding from a one-man project to a duo and cranking up all the nasty, dark and aggressive aspects of their sound in the process. Just as synthwave is beginning to eat itself, "Valediction" takes a bloody hatchet to the whole idea and carves something far deeper and darker from the resultant carnage.

Anyone hoping for a swivel-hipped strut on the dancefloor will find most of their skull embedded in the ceiling when opener "Relentless Passing" lets rip with a machine-gun flurry of blastbeats. We're already a long way away from the turbocharged synth stomp of a few years ago, and while the atmosphere, electronic textures and sense of throbbing momentum are recognizable, the execution is wholly different. Alternating between outright extremity and gloomy synth-pop vibes, with a wall of haunting keys driving the whole crazed maelstrom home, "Relentless Passing" is a breathtaking act of reinvention. Preview single "Wrapped In Wax" is marginally less startling, with syrupy EDM bass powering what is essentially a straightforward gothic rock song, but GOST are instinctively subversive and pepper the track with woozy swathes of noise and swooping sub-bass. "Dreadfully Pious" is a bona fide industrial floor-filler, replete with blank-eyed monotone vocal and faintly euphoric undertones, but once again GOST pack a much harder punch than their peers and the sense that this is, you know, a metal thing is never lost. "Timeless Turmoil" starts in bleak minimalist mode, teeing up another authentically unhinged explosion of hyper-blasting evil before detours through pulsing goth-pop and maxed-out sludge-tronics. The new GOST can do straightforward too: "Bloody Roses" is a kohl-eyed disco stomper with souped-up GIORGIO MORODER vibes, while "The Call Of The Faithful (Faithless)" genuinely does feel like it should be the theme to some hideously violent futuristic road movie.

Not everything here hits the same adrenalized peaks. "She Lives In Red Light (Devine)" feels a little muted and perfunctory in comparison to much of "Valediction", but it's a minor dip in what feels a very complete and credible rebirth. Whether they're twisting their own formula on the schizophrenic "Ligature Marks" or making ageing journalists reach for their old CABARET VOLTAIRE records (possibly just me, obviously) on the cyborg-funk of "Push", GOST have outgrown synthwave, embraced the dark side with renewed enthusiasm and served up a pitch-black feast of digital destruction that should liven up a good few Halloween parties this year.