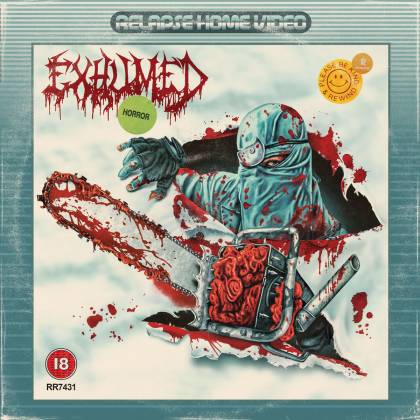 In essence, death metal is what happened when snotty kids heard METALLICA and SLAYER and decided that this music wasn't fast or horrible enough. More than three decades on from the genre's genesis, it may be significant that it seems to be older, veteran bands that have the firmest grasp on that explosive, exuberant spirit of the early days. This year, POSSESSED returned with a new album that crushed just about everything. And now EXHUMED are back to plug us directly into death metal's formative teenage adrenaline rush.

Twenty-one years have passed since EXHUMED released their seminal "Gore Metal" debut. Often lumped in with the flurry of CARCASS clones that emerged in the late '90s, vocalist/guitarist Matt Harvey's crew swiftly proved themselves a more diverse and enduring unit than their peers, with a sound that ebbed and mutated at the command of its creators. But while it was hard to fault more sophisticated efforts like 2003's "Anatomy Is Destiny", it was the mad-eyed, blood-drenched berserker death metal of 1998's "Gore Metal" and its fiery 2000 follow-up, "Slaughtercult", that EXHUMED have returned to in more recent times, most notably on 2013's "Necrocracy" and 2017's "Death Revenge": both undeniable face-rippers that mixed plenty of blistering grind into the band's joyously atavistic din. Clearly the result of some kind of late-career surge of psychotic creativity, "Horror" arrives to confirm that its immediate predecessors were no fluke, and that EXHUMED are still gaining strength and momentum. Not bad for a band that formed in 1990.

You can tell "Horror" is going to be supremely entertaining from its kitschy VHS-saluting artwork. But when you realize that it also boasts 15 songs in an impressively sub-"Reign In Blood" 27 minutes, it may make sense to put a helmet on; this thing really does go off like a pipe-bomb and it continues to detonate, again and again, until the bitter, bloody end. Once again, it's that mindless but unstoppable energy of youth, somehow channeled through a bunch of tour-weary stoics, that makes "Horror" so ridiculously thrilling. It's a remorseless grinding gore bombardment: from unhinged openers "Unsound" and "Ravenous Cadavers" to bursts of belligerent grind like "Utter Mutilation of Your Corpse" (all seven seconds of it!) and "Dead Meat", via the REPULSION-tinged clatter of "The Red Death" and the runaway train, blastbeat madness of "In The Mouth of Hell" as well as recent single "Naked, Screaming and Covered in Blood", "Horror" is one vicious and sustained stream of horrified consciousness. EXHUMED have never lost their knack for a razor-sharp hook and there are plenty of those here, but it's the sheer gleeful intensity of the whole thing that will keep you coming back for more. These old masters know exactly what they're doing, and what they're doing is ripping faces off in the name of all that's hideous and wrong. Bravo.