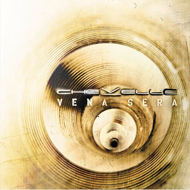 CHEVELLE has always been in a strange place. Catching the tail end of the grunge era, heavily influenced by both that and especially early TOOL, the band managed to carve out a niche for itself despite coming along at the height of the rap-metal movement. The Chicago- based trio's sound has never had anything to do with that anti-musical trend, the group preferring instead to err on the side of melody and hooks. As a result CHEVELLE earned itself a string of rock radio hits even if the band never quite got the respect it deserved in heavier circles.

Now on its fourth major label release, "Vena Sera", things are pretty much the same, including the songwriting and the group's methodical approach to it. But there's no discounting that the group continues to know its way around a melody and is also adept at placing those melodies inside a thick, bottom-heavy groove, even if those grooves get repetitious at times. "Vena Sera" is also an angrier effort than the band's previous records, most likely because of the emotions roiling around the dismissal last year of bassist Joe Loeffler, brother of singer/guitarist Peter Loeffler and drummer Sam Loeffler (holidays must be a hoot these days around the Loeffler camp, especially with brother-in-law Dean Bernardini taking over smoothly on the four-string).

Opener "Antisaint" channels much of the anger (not to mention a blatant TOOL vocal line) and also provides one of the album's heaviest riffs, echoed later on by the equally pounding "Humanoid". Both those tracks and "I Get It" seem the most inspired by the rift between the Loefflers, although the latter is one of "Vena Sera"'s most accomplished and striking tracks, its ringing, softer guitars providing a crystalline counterpoint to the main riff while the tempo is upbeat and almost AC/DC-ish. "Paint the Seconds" also uses gentler guitars for a haunting, somber effect. While all those songs are standouts, however, a number of the rest tend to fall into the usual CHEVELLE trap of blurring together, despite the aforementioned hooks and Michael "Elvis" Baskette's crisp, full production.

In the end, "Vena Sera" is a showcase for this band's tight, punchy sound, Peter Loeffler's fluid vocals and the trio's not-to-be- dismissed songwriting skills, even if the tunes don't have the staying power of truly great rock music. Hardcore metalheads will never warm to the band, but anyone interested in taking a musical journey somewhere between the kingdoms of TOOL and DEFTONES might enjoy themselves.