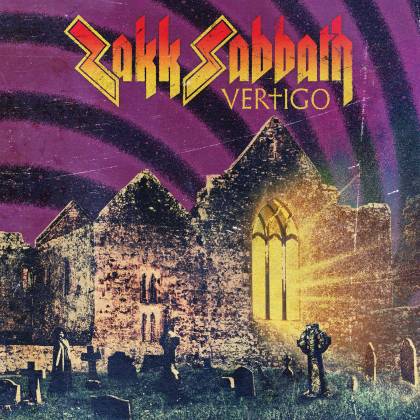 If we can't continue to celebrate and hail the ageless power and glory of BLACK SABBATH's debut album, then what exactly is the point of being alive? Cynics may roll their eyes at the notion of Zakk Wylde, Blasko and Joey Castillo joining forces again under the ZAKK SABBATH moniker, simply to re-record "Black Sabbath" in its epoch-shattering entirety, but cynics can fuck off. Tony Iommi aside, no guitarist has spent as many years steeped in SABBATH-ian tradition as the BLACK LABEL SOCIETY man, and while Wylde's soloing idiosyncrasies may never be to everyone's tastes, diehard fans will at least approach "Vertigo" knowing that this interpretation has been overseen by someone who truly loves and appreciates the cherished source material.

Astute music lovers will be more than familiar with the concept of BLACK SABBATH covers by this point. It would probably be quicker to list the bands that haven't covered the Brummie legends, so there remains a risk that familiarity will breed contempt, even with Zakk Wylde at the helm. Fortunately, my earlier theory that Wylde is the right man for the job is instantly borne out by a glorious version of BLACK SABBATH's titular theme song. Blasko and Joey Castillo plainly have an instinctive grasp of what makes this music so great, too, and thus what could have been a perfunctory retread is actually a subtly exhilarating revelation: no match for the original, of course, but as vibrant and vital a tribute as one could hope for five decades on.

The rest of the album sustains that sense of momentous euphoria. If Wylde, Castillo and Blasko weren't grinning relentlessly throughout the recording process, they must all be amazing poker players because everything from "The Wizard" to a particularly indulgent, semi-improvised and bombastic, 15-minute medley of "Sleeping Village" and "Warning" fizzes with joyful abandon. As a result, even the occasional moments when Wylde feels duty bound to play too many notes within a short space of time feel justified, as if the guitarist is so mesmerized by the power of BLACK fucking SABBATH that he simply can't help himself. In truth, he more than makes up for infrequent lapses in taste with some exquisite acoustic guitar work and an album's worth of bruised, soulful vocals that honor OZZY's original efforts without simply mimicking them.

ZAKK WYLDE's army of fans will definitely want to hear this, despite it not being available on streaming services or in digital form (for now at least). More surprisingly, perhaps, everyone else should give it a blast too. The music of BLACK SABBATH was never going to get old, but ZAKK SABBATH have breathed new life into these arcane treasures anyway. It sounds like it was a hell of a lot of fun to make, and it's just as uplifting to listen to. The Riff will abide!