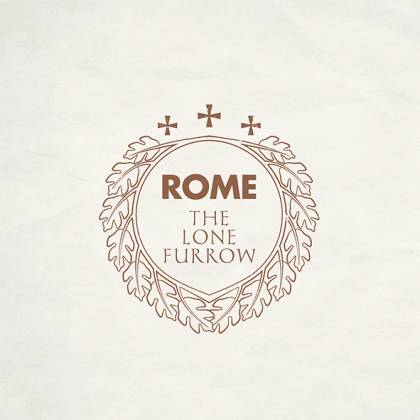 Even the shallowest shuffle through neofolk waters will guarantee an encounter with ROME. JEROME REUTER's idiosyncratic outfit have been churning out profoundly atmospheric and often startling records since 2006. But, "The Lone Furrow" promises to be many metal fans' first taste of the band, thanks in part to Reuter's recent appearance on ME AND THAT MAN's second album and, more pertinently, this album's cameos from NERGAL, Alan Averill (PRIMORDIAL),Joseph D. Rowland (PALLBEARER) and others. Frankly, even though ROME have never exhibited a clear kinship with metal on a musical level, the band's catalogue brims with the kind of dark, menacing intensity that many of us demand from more extreme musical fare. Meanwhile, as bands like WARDRUNA and HEILUNG become serious commercial contenders, it doesn't take a genius to work out that ROME could easily resonate with metalheads in a similar way. With that in mind, "The Lone Furrow" is an excellent entry point.

With a sound constructed from rousing tribal drums, synthesized drones, acoustic instruments of various kinds and Reuter's sonorous baritone, ROME's songs are exercises in slow-build crescendos and mesmeric repetition. It's an endlessly gripping formula which seems to have gained extra dimensions in recent times. Opener "Masters of the Earth" feels like a refined upgrade of previous ROME outings, but it's "Tyriat Sig Tyrias" and the pithily titled "Ächtung, Baby!" (featuring a stirring turn from Alan Averill) that reveal how much Reuter's songwriting has matured and evolved over the years. A beautifully unfussy production — dense with reverb, but sparkling with clarity — helps a great deal, too. Of the remaining tracks, the obvious highlights are gritty and tense recent single "Kali Yuga über alles"; "The Lay of Iria" (featuring JJ of cult post-metal crew HARAKIRI FOR THE SKY),a disarming blend of poetry and treacly ambience that wields great emotional clout; and "Obsidian", a succinct and spiky folk rock gem.

A self-evident career high point and a fantastic way to infiltrate new territories, "The Lone Furrow" is the sound of a cult hero edging towards the light; still uncompromising, but increasingly impressive and quite possibly irresistible.