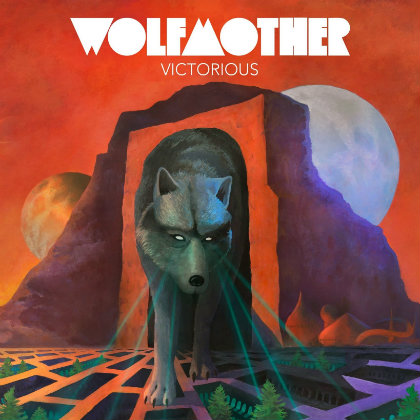 Andrew Stockdale is, for all intents and purposes these days, WOLFMOTHER. A few years back, he tried, to no avail, to drop the moniker altogether and work under his own name. Contract obligations brought WOLFMOTHER back as a playing entity, and this cycle of confusion resulted in the independently released, production-raw "New Crown" album. Now with a new recording deal through Universal Music Enterprises, Stockdale resumes his throwback, fuzz-worshipping course, laying down all the guitars, bass and vocals for the band's fourth album, "Victorious".

On "Victorious", Stockdale — who recorded all vocals, guitars and bass — delegates his usual bassist, Ian Peres, to keyboards while incorporating the session services of drummers Josh Freeese (DEVO, THE VANDALS, WEEZER) and Joey Waronker (BECK, R.E.M. , ATOMS FOR PEACE). The results are what you might expect, professionally divvied, predictable retro rock with a few nice surprises.

Without question, BLACK SABBATH is the foundation to the heaving opening number, "The Love That You Give", which covers a lot more ground than 2:38 might suggest. While Geezer Butler-loving bass is king on this number, it's dialed back somewhat on the oscillating title track in favor of breezy riffs that plug into outlets marked with Iommi. The bridge is so in awe of "Paranoid" one expects to hear Andrew Stockdale pealing “Finished with my woman…” in further salute.

Stockdale drops the SABBATH veneration in favor of T. REX on "Baroness", which yields a snazzy hook. Stockdale is reminiscent of Jack White on the verses of the acoustic-grounded, knee-bobbing "Pretty Peggy", one of "Victorious"'s best-structured and most memorable songs. The windswept harmonizing on the choruses is splendid, as is the beach towner transitioning into the big metropolis theme of "City Lights". The latter pumps upon Joey Waronker's steaming groove and Andrew Stockdale's ultra-slick chords that get trumped only by the quicker and louder "The Simple Life". Like "The Love That You Give", "The Simple Life" hits many motions within a mere 3:12, including a stellar progression serving up a lubricous solo.

The Allmans, ELO (Stockdale's been sporting a Jeff Lynne fro, so the brief homage in here makes sense) and pre-disco Rod Stewart filter throughout the bubbly "Best Of A Bad Situation", while the throwaway “Gypsy Caravan" and the bipolar moping on "Happy Face" are hopelessly SABBATH-ian. As ever, Andrew Stockdale assembles his borrowed passages strategically. But, hate to say, the first two WOLFMOTHER albums already covered them—to greater, substantial effect, dotted more with BLUE CHEER and CANNED HEAT than straight out SABBATH.

Positively, "Victorious" is appreciably lean on time, 35:20, considering how many parts Andrew Stockdale drops into these songs. Smart economizing being "Victorious"'s best asset, the inexorable derivativeness is its detriment. No matter what, Stockdale is a gifted performer and although here he recycles ad nauseam, there's still plenty on "Victorious" to get hyped about.