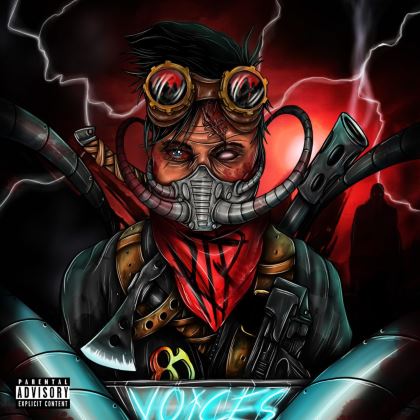 Colorado hard rockers RED TIDE RISING have been together for eight years and just got a taste of success as their 2013 release, "The Rising", peaked at 75 on the Billboard Independent chart and struck as a No. 3 Heatseeker. Lead vocalist Matthew Whiteman only recently turned 21 (backtrack to how young the band members were in the beginning) and already he and his troupe have toured with DROWNING POOL and IN THIS MOMENT.

Guitarist Andrew Whiteman also serves as one of DROWNING POOL's road techs, and he secured that band's drummer, Mike Luce, to come to the table as co-writer and producer for RED TIDE RISING's follow-up EP, "Voices". Additionally, joining the creative team on the EP's second track "You're Nothing (But Shit) " is ILL NINO guitarist Ahrue Luster. Add Madonna and Kelly Clarkson engineer Jeff Kanan to the mix behind "Voices", and RED TIDE RISING stands to quickly build its audience.

Unfortunately, RED TIDE RISING here dumps five songs of generic anger rock in the spirit (definitely not the soul) of SEVENDUST, even if the EP's manufactured and puerile hatred is sure to catch on with more than a few folks.

While Andrew Whiteman's tasty guitar intro to "Writing on the Wall" creates a somber yet melodic haunt, the agro skulk of the track is nothing you haven't heard before. Frankly, the rest of the song is a ho-hum exercise in (bare) anger management. Positively, Matthew Whiteman sounds much older than he is and he exhibits a veteran's control over his hard and clean vocals.

The slow menace of "Writing on the Wall" is picked up from its pissy duff and given a hard nudge into the slightly quicker and far angrier "You're Nothing (But Shit)". The song is both annoyed and annoying as Matthew Whiteman lets his spit fly as loosely as his profanity, aiming a juvenile tirade, according to the EP's press release, toward "the asshole who repeatedly tells you how great life is, all the while living a complete façade." It's easy to empathize with RED TIDE RISING, sure, but for those with longer life experience, this preamble is laughable since the vicious cycle of fakes, posers, sellouts and backstabbers only grows worse with age.

"Suffocate" starts out with a bang, then settles into the same methodic slither as its predecessors; albeit it is better written and stuffed with the EP's best riffs. Some excellent harmonizing on the choruses gives "Suffocate" verve beyond its hostile primping. The SEVENDUST-dragged chunks of "The Sound of Voices Screaming" offers nothing other than a different voice than the more charismatic Lajon Witherspoon helming it. "New Breed" has a hefty bass pump from Michael LeBois and digging rhythms from Matt Guerin (a slick guitar solo from Andrew Whiteman doesn't hurt the cause),but when you break this song down, RED TIDE RISING is once again grabbing from SEVENDUST—and DROWNING POOL, naturally.

RED TIDE RISING doesn't need validation or refutation by the press. They have their act figured out, they have connections and they're madder in sound this time around. With 2016 pissing people off by the droves for varying reasons, "Voices" will hit receptive folks looking to release their hounds. A young, driven band armed more with "shits" and "fucks" than stocks and bombs, like it or not, wins the day quicker with the masses these days.