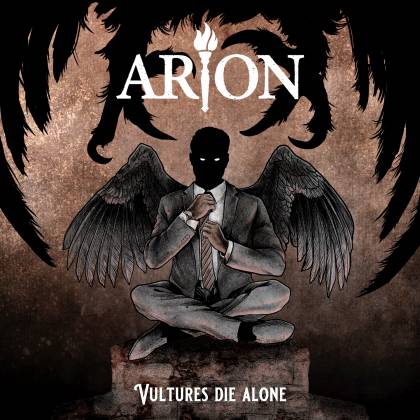 This is almost certainly the wrong forum to be discussing the Eurovision Song Context, but that is where ARION first made their mark in the music world. With LORDI as a rather endearing precedent, the Finns have emulated their fellow countrymen by forging a solid and promising career, with two strong studio records in the bank to date, and very little evidence that an initial dalliance with the world's sparkliest song competition has impeded their progress. And quite right too, because as they demonstrate repeatedly on "Vultures Die Alone", ARION have such an unerring knack for writing catchy songs and playing with all available balls to the wall that even the most tune-phobic metalhead might struggle to resist.

Yes, there is something overwhelmingly shiny and wholesome about the sound of "Vultures Die Alone". This is gleaming, state-of-the-art melodic bombast with roots in power metal, all things symphonic and even twinkly toothed AOR, but with enough modern metal crunch underpinning the whole thing to negate any potential cheesiness. More importantly, ARION pull off the impressive trick of straying audaciously close to the pop-friendly gloss of latter-day metalcore, without sacrificing one iota of heaviness. Both "Out Of My Life" and the roof-raising "Bloodline" (featuring BATTLE BEAST's godly Noora Louhimo) are infernally memorable and intrinsically bright-eyed, but vocalist Lassi Vääränen has grit, soul and power to spare, elevating even the simplest of melodic ideas with sheer foot-on-the-monitor exuberance.

After a sustained blur of anthems, "Vultures Die Alone" takes a more intriguing turn. "I Love To Be Your Enemy" is dark, epic and subtly progressive, with Vääränen flexing his talents and exhibiting laudable versatility and a dash of storytelling panache. It's a startling moment, and one that suggests that ARION are only beginning to explore their sound's limits. Similarly, "Where Ocean Greets The Sky" is a colossal, melodramatic power ballad with woozy, tripped-out undertones: more revelation than curveball, it's the Finnish quintet's most powerful moment to date. After that, "I Don't Fear You"'s power metal fist flurry and "Until Eternity Ends"'s glacial eulogy adds further depth and substance to what is an admirably cohesive, succinct and dynamic slice of fervently melodic heavy metal. It's hard not to raise a toast to that. Kippis!