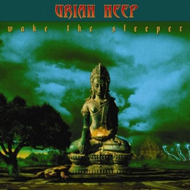 If memory serves, the last URIAH HEEP album I owned was 1982's "Abominog" and the last one I recall hearing was 1985's "Equator". So yes, it has been awhile. Mick Box and the boys certainly haven't waited for me to catch up and continued releasing albums, just like they've been doing since 1970. That said, new disc "Wake the Sleeper" is the first release since 1998's "Sonic Origami" and if the latter is anything like the former, then I've been missing out in a big way on some high-quality classic rock.

"Wake the Sleeper" is a thoroughly enjoyable collection of rock songs with roots that run back to some of URIAH HEEP's '70s fare, sans the proggy excesses, and with loads of melodic majesty, the scintillating keyboards of Phil Lanzon, and Mick Box's super-sharp guitar playing. Like an ode to the jammy bombast of yesteryear, the album kicks off with the quick-paced instrumental (except for some operatic harmonizing and the utterances of "Wake the Sleeper") title track, which features Box's famed wah-wah effected guitar lines. Then comes the album's two stone-cold gems, "Overload" with its driving rhythm and distinct Box guitar lines and "Tears of the World", which features an infectious chorus defined by a simple, yet brilliant, harmony vocal. Lanzon's beautifully flowing organ is so important to the sound of not only these tracks, but the entire album (listen to his solo during "Angels Walk with You"),just as Bernie Shaw's smooth-as-silk vocals bring the melodies to life.

Shaw is a first-class singer in the mold of UFO's Phil Mogg. "Light of a Thousand Stars" even has a UFO feel in the way the tune cascades during the verse. Nothing quite hits the highs of an "Overload" or a "Tears of the World" (though guitar/bass/organ dropouts and tuneful '70s vibe of "War Child" comes close),but every song is strong. Whether it is the comparative mellowness of "What Kind of God", the organ-propelled "Heaven's Rain" or the upbeat rocker "Ghost of the Ocean", the positives continue raining down upon the listener.

Very much done in the British tradition of classic rock with soul, "Wake the Sleeper" is a grand example of what bands like URIAH HEEP and UFO continue to do so well; the creation of smartly composed, immediately memorable, and positively energetic rock. It is about as genuine as it gets. Now more than ever the world needs albums like "Wake the Sleeper".