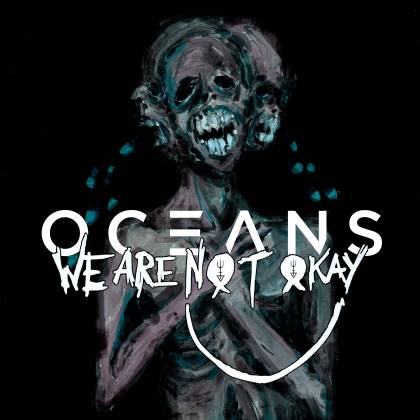 Their solid but flawed debut album may not have set the world alight, but Austria's OCEANS are clearly heading in the right direction. The band's sound remains an audacious but straight-ahead blend of crunching, post-deathcore riffing and darkly atmospheric, alt-rock textures, but these songs dig much deeper than those on the debut.

In fact, the four new cuts on this EP suggest that OCEANS' songwriting skills have sharpened up considerably during the last 12 months. These are big songs, with stirring core melodies and big choruses, but their bruised and bruising heaviness often allude more strongly to melodic doom than to metalcore. The result is a rather disquieting hybrid, wherein supreme, ultra-polished catchiness and the glowering menace of the underground reach some strange form of harmony. Opener "We Are Nøt Okay" — featuring CALIBAN's Andreas Dörner — is the obvious, fists-in-the-air anthem here, with lyrics that could hardly be more appropriate for this most anxiety-inducing of eras, and levels of heaviness that belie the song's absurdly memorable hook. "Everyone I Love Is Broken" is a straight-up gem, with MACHINE HEAD's Robb Flynn adding his scabrous but soulful tones to a wonderfully windswept and widescreen chorus; graced with the crushing charisma of INFECTED RAIN singer Lena Scissorhands, "Voices" takes OCEANS further into brutal realms, with a savage mid-song breakdown, shades of GOJIRA's spaced-out onslaught and another towering chorus. Closer "Shark Tooth" completes the quartet, with ANNISOKAY's Christoph Wieczorek and OCEANS frontman Timo Rotten dueling away over some grittily KORN-like, lurching grooves.

Great stuff, then, and a big step forward for a band with tons of potential. OCEANS' next full-length promises to be a scorcher.