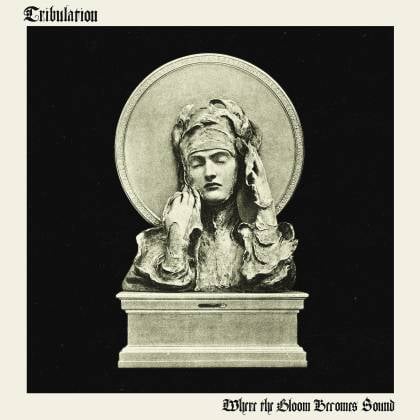 Where The Gloom Becomes Sound

The perfect band for a bleak midwinter, TRIBULATION have long since proved themselves to be smarter than the average metal band. When the Swedes took an angular left turn down a more straightforwardly rocking avenue for 2015's "The Children of the Night", they somehow managed to retain all the macabre menace and obscure venom of their early death metal efforts. The result was a hybrid that incorporated ghoulish post-punk vibes, spidery guitar figures and rampaging, hard rock crescendos: all familiar tropes, but duly presented in a way that felt, and still feels, wickedly original. Two years on from the sumptuous and unnerving "Down Below", TRIBULATION's fifth album is instantly recognizable as a serious big, bold and bombastic rock record, but that sense of queasy malevolence continues to fester beneath the surface.

There are so many bands peddling some form of goth-tinged black 'n' roll these days that it's easy to miss how idiosyncratic TRIBULATION can be. A rumbling storm of foreboding and fury, opener "In Remembrance" is a slow-burning start, but one that thunders imperiously forward, like some hellish funeral parade into the endless dark. It also boasts a huge chorus, with faint echoes of SENTENCED at their majestic best, while exerting more sonic heft than anything the band have attempted before. Frontman Johannes Andersson has sharpened up his delivery, too, and sounds more like a snarling infernal rock god than ever on the stirring and succinct likes of "Hour of the Wolf" and "Elementals", where the slender but unmistakable influence of THE CULT and FIELDS OF THE NEPHILIM permeates the onslaught and classic rock tropes are hurled around with mad-eyed abandon. Even more impressive is the artful, heart-rending doom sprawl of "Dirge of a Dying Soul": essentially a refined piece of heavy metal songwriting, it's a gnarly but exquisite anti-ballad with both theatrical flair and enough filth and grit to choke a rhino. Similarly, "Daughter of the Djinn" is a whirlwind of dynamic shifts and deeply creepy detours, as TRIBULATION switch from propulsive rock mode to suffocating tension and back again, like the mischievous devils they plainly are.

Elsewhere, "Inanna" is a stately reverie with an old-school heart, while "Funeral Pyre" doffs its bloodied cap to JUDAS PRIEST, as yet more choking darkness descends over a surging, hook-filled sprint toward oblivion. Climactic epic "The Wilderness" nobly provides the pitch-black icing on the cake; another deftly crafted metal anthem, steeped in otherworldliness and delivered with the kind of rampant exuberance that generally happens only when a band absolutely know that they are pretty hot shit right now.

You may, of course, argue that more gloom is the last thing we need right now. But TRIBULATION are such a class act, and "Where the Gloom Becomes Sound" is such an exhilarating, self-evidently superior piece of work that a slice of this divine darkness may turn out to be exactly what we needed after all. Either way, this rocks like the Devil himself.