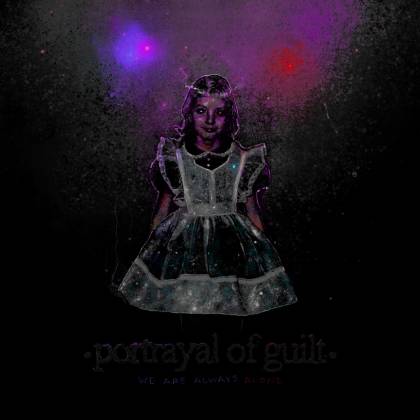 We Are Always Alone

PORTRAYAL OF GUILT doesn't like to waste time. Since their 2017 inception, the prolific Austin, Texas-based musicians have doled out several splits and EPs, in addition to a well-received full-length album, "Let Pain Be Your Guide". The ball has certainly bounced in the band's favor in a short amount of time as they've toured extensively throughout the US and Europe, as well. The need for a breather will be inevitable at some point, but the eclectic band is still holding its breath and swimming onward, as the time has arrived for PORTRAYAL OF GUILT's sophomore effort: "We Are Always Alone". Surprisingly the band has upped the ante in terms of what they're capable of creating.

"We Are Always Alone" clocks in around the half-hour mark, divided into nine intense tracks that hit the listener with the subtlety of a punch to the face. The ensemble encompasses the key facets of significantly varied genres in a manner that flows mellifluously — to those who enjoy extreme music that's vicious and caustic, that is. With "We Are Always Alone", PORTRAYAL OF GUILT pulls the abrasive aspects of hardcore, grindcore, screamo, death metal, black metal, sludge, noise, post hardcore and post metal and then the band throws the hodgepodge with force at the musical canvas. It might be off-putting to some purists of the component genres, yet some fans of DRAGGED INTO SUNLIGHT are likely to gravitate toward this, or perhaps that segment of BLOOD BROTHERS fans who are inclined toward the dark side to the point of experimenting with Ouija boards.

Opening number, "The Second Coming", bursts forth with vitality and intensity, setting the tone for all that follows. Frontman Matt King (vocals/guitars) lets his shrieking voice lead the way amidst the maelstrom of sound that's steadied by James Beveridge's impressive and tasteful drum work. He hammers down purposeful blast beats prior to this introductory song's transition into an ambient soundscape. "My Immolation" stands apart from the rest of the album in several regards. It starts with and propels a straight-forward groove that swells up toward a blasting black metal section, and that's all before a brooding post-hardcore finale concludes the song with soft, melodic, clean vocals. What's impressive is that PORTRAYAL OF GUILT masterfully transitions such noticeably disparate sections with ease. The delivery is fluid, and it makes sense.

PORTRAYAL OF GUILT is a forward-thinking band that open-minded extreme music fans would be wise to spend some time with. The sights and sounds within "We Are Always Alone" aren't anything heavy music fans haven't heard before. But the album is exciting because of the vibrancy of the delivery of those classic extreme music sounds. Hopefully PORTRAYAL OF GUILT has plans to stick around.