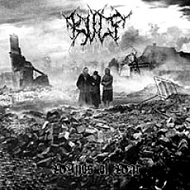 Really now, who wouldn't chuckle at the notion of a black metal band naming itself KULT? I sure did. And then I listened to the debut album, "Winds of War", and the laughter came to a screeching halt. I'm almost of the mind now to think that it is a most apt moniker for an Italian band playing an old school style of raw black metal with strong arrangements and grim atmosphere.

On "Winds of War", KULT churn out some deliciously apocalyptic and expertly arranged black metal. When members Werewolf (Bloodtide) and Kacele (ANCIENT's Aphazel is credited with guitars) set out in 2002 to play a style of black metal that eschewed pretentiousness as much as it did keyboards and female vocals, they were dead serious. The result speaks for itself. Starting with a biting guitar tone and crisp, yet still primal as hell, production, "Winds of War" feels like a black metal album is supposed to feel: harsh, untamed, and frost-bitten. Mostly up-tempo (though not in a MARDUK sense),one of the main reasons the album works is because the tempo changes work. In other words, songs like "Il Crepuscolo" and the title track move from mid paced to fast-paced and do so effortlessly, the arrangements not seeming as though changeups were incorporated haphazardly. "Final Embrace" remains slow, steady, and haunting for the entire ride, while no one will be surprised that a strong track called "And Forever Winter" is in fact…well…of the frozen north variety. A woman's screams are downright disconcerting when they appear in the (mostly) quick gallop of "Torture", and the pacing and vibe of "Seven Blades (of the Reaper)" has DARKTHRONE written all over it. Instrumentals "Enstrangement" and "Omega" are strong as well, the former caustic and compositionally dynamic and the latter more ethereal with clean picking and melancholic atmosphere.

So the moral of the story is "don't judge a book by its cover", as KULT lives up to its name. This is the good stuff, folks. There is not a weak track on the album. "Winds of War" is a disc that any fan of traditional black metal should enjoy.