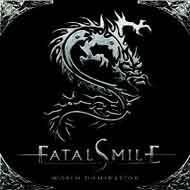 My god, take a gander at the back cover of FATAL SMILE's "World Domination" and tell me that you don't immediately think of MÖTLEY CRÜE. In that photo especially two of the guys even look like Nikki Sixx and Vince Neil. As it turns out, the MÖTLEY CRÜE reference is indicative of what is in store for the listener. The Swedes basically kick it old school with an '80s glammy hard rock style (but not in a retro WARRANT kind of way) pumped up with some modern musculature.

On the whole, "World Domination" is a decent, no-frills album that rocks hard and features a handful of infectious melodies. Listening to the album is, in many ways, akin to taking a trip down memory lane, considering the number of clichés and familiar parts, which shouldn't be taken as an affront to the band's style. Rather, you get a mix of reference points from acts that offered a bit more toughness than the typical hair bands, such as the aforementioned CRÜE (think "Girls, Girls, Girls" and "Dr. Feelgood"),BLACK 'N BLUE, and SKID ROW, albeit with a tinges of classic European heavy metal. It's all about a big riff, a solid rhythm section, big choruses, and the all-important hook, together with a good bit of variety in the songwriting; some of which works well and some of which is middling.

The front half of the disc features some of the better material (e.g. "S.O.B.", "Stranger", and "Primed & Ready") due to catchy choruses and brawny arrangements. The main riff on "Primed & Ready" actually reminds of something out of the GN'R bag of lick tricks with a BULLETBOYS chorus. Continuing down the "Who's Who" path, one hears a little "Under Lock and Key"-era DOKKEN in the riffing on the verse of "Run for your Life". The weaker material suffers mainly from too much cheese and emphasis on the clichés, exemplified by "Too Far Down", "Run for your Life", "Out of My Head", and the obligatory boogie/strut vocal/drum pattern on the stop/start verse of "Straight to Hell", but those tracks are still tolerable. For the most part, FATAL SMILE manages to steer clear of the painful moments of '80s/early '90s glam metal and hard rock, thanks in part to the European metallic flourishes (check out the song "Fatal Smile") and some attention to detail in the songwriting.

"World Domination" is an album that seeks to be nothing more than an unashamed hard rock album with sing-along choruses, but is a ways from setting the world on fire. Overall, FATAL SMILE gets the job done, aside from a few missteps along the way.