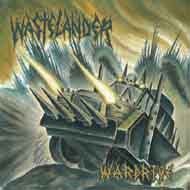 These past few years it sure seems like everything Chris Black touches turns to gold, whether it is his playing in bands SUPERCHRIST, PHARAOH, or DAWNBRINGER, his guest appearances and production duties with NACHTMYSTIUM, and now his production and label chief role with Lansing, MI's WASTELANDER. Black certainly has an ear for great metal, as "Wardrive" so aptly illustrates. It is one of the more creative — even unique in the context of the manner in which influences are blended — albums I've hard this year and it just screams genuineness.

Matt War (vocals/bass/keys),Xaphan (guitars/vocals),and Pit Viper (drums) bring the heavy with an organic sound that features the driving power and fundamental riffing of black metal (e.g. DARKTHRONE) and punk, occasional CELTIC FROST moments (vocal inflection and riffing),and a vague VOIVOD-ian extraterrestrial atmosphere. Shrouded in images of the world's apocalyptic end, the music on "Wardrive" chills with eeriness and burns with the lingering pain of a napalm rainstorm.

The approach centers around quick-tempo rip 'n slams, such as the straightforward title track or the black metal-leaning "Baptized in Ashes". But pace shifts are placed for maximum impact, often including eerie whirring/wind effects ("Knee Deep in the Dead" and "Baptized in Ashes"),while wild 'n wooly solos aren't so much played as blasted off into the earth's atmosphere. The air raid siren that sits in the background during "Final Combat" joined by police sirens, screams, and civil defense radio broadcasts of "The United States is under nuclear attack; take cover immediately" at the song's close induces panic. The beginning of "Wastelander" sounds like MOTÖRHEAD's "Overkill" and its main chorus is overly melodic with a clean, yet hardly soothing, vocal that is unlike anything else heard on the disc, followed by yet another spiraling solo. It all adds up to an album that bleeds energy and never loses momentum.

"Wardrive" is further proof that there is more to metal than what one is fed through mass media channels. A little digging in the dirt will uncover more bands like WASTELANDER that possess an understanding of what the true spirit of metal is all about.