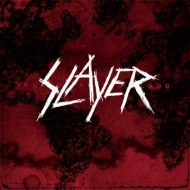 I'm going to skip over all the hoopla about the release date of a new SLAYER album being like a holiday for metal fans. You all know the band's history and legacy. You all know that almost 25 years ago they changed the face of metal forever with a little album called "Reign In Blood" and have been the genre's torchbearers ever since. No need to bring up their mid to late '90s journey outside of the trash comfort zone and return to speed metal glory with "God Hates Us All" and (the far less memorable) "Christ Illusion". Most have you have lived, ate, breathed and shat SLAYER at one point or another over the last twenty-some years so I'm just going to get down to business.

Granted, this is SLAYER we're talking about here, but the nitrous-fueled hype machine that drove "World Painted Blood" up and down everyone's streets almost had me burnt out on the album before I heard it. Though probably not the label's intent, my indifference turned out to be a godsend as I was finally able to approach a SLAYER album without a hint of bias and to be perfectly honest, this was not a case of love at first listen. After a slow, yet effective build, opener "World Painted Blood" jumps into fairly aggressive thrash gallop, but doesn't really have that "straight-for-the-throat" feel you'd expect from track one. A solid tune, for sure, but something about it felt constrained. The next couple of tracks, however, "Unit 731" and "Snuff", don't hold a goddamned thing back. Both of these punk-tinged thrashers would easily hold their own up against a number of SLAYER classics. More thrash-or-be-thrashed fun comes from two politically-charged speed metal symphonies of destruction driven by some of Dave Lombardo's best drumming in years; "Hate Worldwide" and "Public Display Of Dismemberment". Of all the songs on "World Painted Blood", the last four I mentioned come closest to the fury that was SLAYER in the '80s and early '90s. A strong case could be made for the balls-out "Psychopathy Red", but it's a little hard to judge this one against the others due to its noticeably superior production. Were the entire disc to sound this beefy, my opinion of the record would be much different, but more than a few tracks feature guitars that could stand to pack on a few pounds of muscle, where tone is concerned.

As "Seasons In The Abyss" has proven, SLAYER thrives when they step outside of the box, slow things down a bit and reach into the darker recesses of their collective minds. "World Painted Blood" sees the band doing just this with a trio of terror-filled tunes just as, if not more, spine-chilling than anything SLAYER has accomplished in the past. Of the three, "Human Strain" and the ode to Countess Bathory, "Beauty Through Order" are actually quite progressive (for SLAYER, at least). Both tunes are creep along like a viper in the grass and deliver the expected deadly strike. Perhaps the scariest damn song we'll hear this year, "Playing With Dolls" is a nightmare set to music. With spoken-word vocals that climax into classic Araya rage and near brilliant rhythmic interplay between King and Hanneman, this one is arguably the album's best.

Though it took some time to grow on me, and I'll never be too thrilled about the production, the inclusion of "Americon" (one of SLAYER's most uninspired songs) or the way the disc both began and ended on less than intense notes, I eventually found "World Painted Blood" to be among my top five or six SLAYER albums of all time. It's a good mix of killer, thriller and a little bit of filler. Don't jump into this expecting another "Reign In Blood", but SLAYER 2009 still has more than a few ass-kickers to offer.