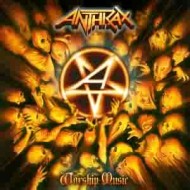 Remember when the mention of Joey Belladonna and ANTHRAX in the same sentence conjured images of five guys stomping around in Bermuda shorts, shouting "NOT" and spelling things backwards? They didn't. What they did remember is how goddamn ridiculously heavy they can be when they put their metal thrashing minds to it. "Worship Music" reminds us all of that fact.

A combination of the darker side they showed on "Persistence Of Time", the powerhouse riffing of "Sound Of White Noise", "Among The Living"-inspired classic songwriting and a whole lot of "we-still-got-it," "Worship Music" is ANTHRAX on fire. The intro track, "Worship", lulls you in with a soothing bit of cello before feedback swells and "Earth On Hell" kicks in the door and bursts into the room, throwing handfuls of concrete groove at everyone in sight. "The Devil You Know" and "Fight ‘Em 'Til You Can't" serve up bootfuls of that classic Ian stomp and choruses that sink their hooks deep into your skin. The man casting those hooks, Mr. Joey Belladonna, makes the return of the decade. I won't waste any time on the John-vs.-Joey debate as Belladonna's performance speaks for itself. Simply put, the dude walked into the studio and knocked the proverbial ball out of the park. Highlighted by "I'm Alive" (a timeless tune if there ever was one) and "In The End", Joey Belladonna's unmistakable voice proved to be the perfect fit for this album.

Of course, no single individual deserves more credit than another here. "Worship Music" is the product of ANTHRAX firing on all cylinders. Scott Ian and Rob Caggiano (who coughs up some damn respectable solos on this disc) chug out more gargantuan riffs than should be allowed on a single release. Providing a mountain of low end, Frank Bello's rubbery bass rides perfectly beneath the two guitarists, pounding away in lockstep with Charlie Benante's always-solid drumming. From a songwriting perspective, this is some of the best material the band has offered up in quite some time. Granted, this isn't top to bottom badassery. Despite an excellent chorus, "The Giant" delivers a couple of clunky and forced sections. "The Constant" is another track I can pass over without much hesitation. That said, I'll put the massively towering "Judas Priest" and "I'm Alive" against any tune in the band's collection.

It's ironic that an album that almost never was suddenly became the release nobody should go without. "Worship Music" is one of the few records in recent memory that immediately grabbed me and has yet to loosen its grip. ANTHRAX has been known as titans for a generation now and they've returned to make sure the next batch of little thrashers address them properly.