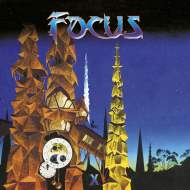 Dutch prog rockers FOCUS may not be the first ensemble that leaps to mind when discussing the genre, just like NEKTAR, GENTLE GIANT and TANGERINE DREAM ominously seem to get cut from the thread once folks get stuck on immediate notables such as YES, EMERSON, LAKE AND PALMER, THE MOODY BLUES, KING CRIMSON, URIAH HEEP, JETHRO TULL, Michael Oldfield and PINK FLOYD. Of course, FOCUS has wrangled from each of these stalwarts throughout their repertoire over the years, albeit that has coughed up only one significant hit, the ultra-weird yet super-wired "Hocus Pocus", plus their lesser-known fan favorite, "Sylvia".

If anything, FOCUS is a reflective mirror of a style of music that dominated the late sixties through the Seventies before British punk rock all but drove a stake into its heart. You'll hear plenty of FOCUS' aforementioned peers in their work (it's often hard not to think of JETHRO TULL for Thijs van Leer's footloose fluting alone),but they've also managed to tool in external flavors over their career such as jazz, rhumba, flamenco, baroque, calypso and rainy day rock. At times this has ventured perilously into Muzak territory, but at their best, FOCUS has been able to pull off solid escapist prog that hearkens everything from STEELY DAN to SANTANA to early years CHICAGO to Dave Brubeck and Herbie Hancock.

On "Focus X", the band hired fantasy artist supreme Roger Dean, whose most recognized work has been spread throughout YES' catalog, not to mention ASIA, URIAH HEEP, BUDGIE, GENTLE GIANT, ATOMIC ROOSTER and Steve Howe releases, amongst others. Automatically one thinks they're on their way towards a YES homage with "Focus X", but that's not really the case whatsoever. Only "All Hens On Deck" and the booming solo section of "Le Tango" carry that familiar winding rock drive that personifies YES. Yet there's more of that omnipresent Ian Anderson rock fluting from van Leer and more of his madcap vocal scatting that crops up in FOCUS' work and miraculously never shot down "Hocus Pocus"' staying power.

The group's first album in six years, "Focus X" still carries that analog texture of their long-ago "Focus II" (aka "Making Waves"),"Focus 3" and "Hamburger Concerto". Thus "Focus X" very much sounds like it belongs in that era. Fundamentally, this is FOCUS doing a FOCUS album, which means dynamics and experimentation rule. Primarily operating in instrumental mode set to a lollygagging loft (minus a few booming rock jobs such as "Father Bachus"),"Focus X" is to be mostly appreciated for its astute mix of music theory and its ostentatious layering. Thijs van Leer isn't going to win many people over with his shaky vocals on "Le Tango", yet the slithering seduction of the group at-large keeps a detailed groove beneath the song's deliberate cha cha rhythm. At least his native tongue narrative hammering overtop the spaced-out rock fusion of "Hoeratio" sets up for a banging middle section where guitarist Menno Gootjes gets lost in his own microcosm of sonic grandeur. Van Leer resurfaces with a manic rant that only diehards can appreciate and herein lies the reason why FOCUS were global sensations only for a short time. You're genuinely happy by the time he sticks his flute back to his lips and sets a spritely baroque roll through "Talk of the Clown".

"Message Road" is an introspective ditty that's almost bare in comparison to the rest of "Focus X"'s random occupation of every open fill they can heap a part upon, which sets up the brisk closer, "X Roads". "X Roads" moves from jazz syncopation to fiery salsa rock with seamless transition you have to savor it. There's no real reason for vocal supplement here, but as Thijs van Leer jabbers about keeping one's eye towards an uncertain future without clamoring for nostalgia, you get the feeling this could be FOCUS' swan song as much as it hints there's possibly more to come. The rambling percussion by mainstay drummer Pierre van der Linden and freestyling bass from Bobby Jacobs sends "X Roads" and the entire album on a blithe and cajoling exodus that reprises the uppity and jive-fueled prog explosion of "Father Bachus" at the beginning of the album.

FOCUS may be oddjobs, but they certainly know how to both celebrate and bastardize music theory to unique measures only a select few are able to embrace.