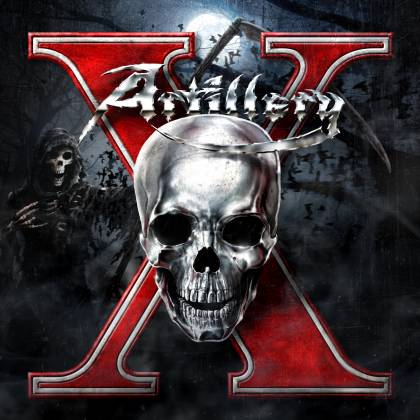 Thrash heads know the score. You never could fuck with ARTILLERY as members of the serrated-edge riff elite, from the Danish band's early classics "Terror Squad" and "By Inheritance" right through to more recent works by the reconvened and consistently convincing incarnation of guitarist Michael Stützer's enduring ensemble. Their last album, "The Face Of Fear", was one of 2018's most criminally overlooked gems, and while ARTILLERY have often been airbrushed from received wisdom about thrash's glory days, everything they do on "X" hammers home the superiority of their subtly progressive but always brutal take on the genre.

Stützer found the perfect replacement for talismanic frontman Flemming Rönsdoff when he recruited Michael Bastholm Dahl nearly a decade ago. The singer's power and presence are splattered all over these songs, sustaining ARTILLERY's refined melodic sensibilities with flashy aplomb and spewing fiery grit when it counts. The result is a pulverizing stream of thunderous, life-affirming heavy metal songs, with feet planted firmly in both traditional notions of heaviness and in that forward-thinking sweet spot that the Danes occupied with such force the first time around. It's an intoxicating formula; wherein something as knowingly goofy and straightforward as "In Thrash We Trust" — an instant, crowd-pleasing singalong if ever we heard one — is executed with neck-snapping authority and enough sonic muscle to shatter your ribcage.

Thanks to Dahl's soaring tones, ARTILLERY can deliver a powerhouse, hard rock thumper without missing a beat: "Turn Up the Rage" wears its AOR instincts with pride, while still packing a fearsome, crunching wallop. Similarly, "Silver Cross" comes across as a titanium-plated upgrade for Tony Martin-era SABBATH, a big melody to the forefront, but delivered with runaway bulldozer momentum. "Varg I Veum" repeats the trick at a dark-hued mid pace, and with another fists-in-the-air chorus to kill for.

"X" is topped and tailed by its two finest moments. Opener "The Devils Symphony" is almost comically belligerent and masterfully fine-tunes ARTILLERY's 21st-century sound via a thrilling torrent of prime Stützer riffing. Closer "Beggars in Black Suits" is even better: the album's most overtly thrash-honoring blowout, it's both a stunning showcase for Dahl's octave-shredding talents and an unabashed show of musical strength, with enough great riffs to give GARY HOLT a boner.

There was a time when ARTILLERY were loosely associated with the more overtly experimental likes of VOIVOD and CORONER, but the real genius of Stützer's vision is that his band have disregarded the rulebook while simultaneously writing massive tunes. Nearly 40 years after their story began, this band are still a unique and exhilarating proposition.