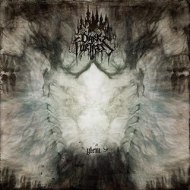 Within minutes of thinking about the continual elevation of DARK FORTRESS' game these past several years, culminating (well, time will tell) in "Ylem", it was more than a few times that the thought "the German DIMMU BORGIR" entered my mind. Considering that such a proclamation will no doubt result in diehard groups of detractors and devotees of the Norwegian and German acts becoming flummoxed and/or struggling with twisted panties, some clarification is in order. It is not so much that the bands are musically similar (for one thing, the Norwegians lean heavily on the symphonic and grandiose),but much more so that both are prime examples of bands that have taken melodic/dynamic/modern (and professionally recorded) black metal to new heights without "progressing" to such an extent that terms like "avant-garde" or "esoteric" are tossed about. In the case of "Ylem" then, DARK FORTRESS flies at altitudes higher than ever before by blending varied songwriting styles and melodic sensibility with pitch black atmosphere and sheer malevolence, a delicate balance that has proven elusive for all but the elite.

"Ylem" excels as much for its compositional breadth as for an obvious unwillingness by DARK FORTRESS to smooth out jagged edges in some vain attempt at commercial accessibility. In other words, melody is an important element, including a recurring noteworthiness in the use of captivating guitar leads, yet the constancy of menace and permeating chill wreak havoc on one's sense of well being. Moreover, it is that omnipresence of malice, overt or otherwise, even amidst a surgically precise production (one that advances the musicality, instead of restraining it),that is an indefinably key element.

Most impressive is that those qualities are present across a variety of compositional styles, as opposed to the reliance on a perpetual blast beat to convey nihilism and aggression. Blasts are indeed present and frighteningly impacting, but used only when necessary to ensure the cessation of breathing, a case in the point the movement from overwhelming blast-based intensity to crunching mid-tempo steamroll on "Satan Bled". As a matter of fact, "Ylem" also offers several songs that devastate with some of the best diesel-powered grooves this side of SATYRICON. And on songs like the mammoth "Osiris" it is the confluence of multiple factors that results in such a smashing success.

Intensity does give way to more introspective, quieter passages that serve as effective points of contrast, yet do so without the loosening of tension, no more apparent than on the deceptively subdued "Wraith", a semi-ethereal affair, featuring Mortal's clean/haunting guest vocals, that is reminiscent of KATATONIA's coldness and OPETH's mellower material. It would almost seem out of place if it didn't demand one's attention as a track as equally relevant and compelling as any other on the album. It is one that seeps into the pores.

Bolstering what are already skillfully arranged songs are sinister, ironclad riffs, song-centric and hair-raising solos, the keyboards of Paymon that perfectly balance atmosphere with melodic enhancement, and the percussive drumming of Seraph whose subtleties become more impressive with each spin. Taken as a whole, "Yelm" is musically engrossing and incredibly heavy.

The 70-minute duration might seem daunting for those not accepting of long hauls, yet if a 50-60 minute disc is the alternative, the question becomes "what do you cut?" Considering that the choice is a virtually impossible one to make speaks volumes about the consistency and quality of the songwriting from beginning to end. The fact is that "Yelm" works just as well as a segmented spin as it does as a one-sitting listen. Besides, if it is a daunting task that you seek, then try finding the flaws on this album. Recommended with extreme prejudice.