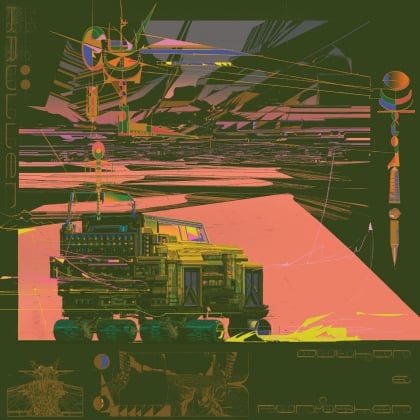 While gleefully hurling spanners into the works, at some unholy midpoint between industrial, drone, doom and alternative metal, AUTHOR & PUNISHER (Tristan Shone to his friends) has already made eight full-length albums of spine-wrenching, soul-flaying heaviness and avant-garde sound subversion. It would be no exaggeration to say that "Krüller", album number nine, is easily the most accessible so far, and yet such are the layered depths and all-encompassing weight of these songs, that Shone's second album for RELAPSE RECORDS is also utterly uncompromising and, at times, overwhelming.

If Shone does have a formula, it hinges on the fervent souping up of machines, and the endless, dread-filled bottom end and waves of excoriating distortion and feedback that emerge as a result. Coupled with a much greater sense that AUTHOR & PUNISHER is a songwriting vehicle, rather than just a means to flatten people's skulls, and "Krüller" swiftly outstrips its predecessors.

Opener "Drone Carrying Dread" does exactly as advertised, plumbing new depths of dub-inspired, slow-motion crush, as viscous melodies ooze and something that may once have been a guitar stirs up a whirring storm of freeform scree, for seven murderous minutes. "Incinerator" makes greater use of space, with ambient resonances and fizzing synths locked in synch with the grinding ebb and flow of cosmic tides. "Centurion" is damnable electro-rock, priapic with vitriol and as ominous and oppressive as early SWANS. "Blacksmith" does evil things to a breakbeat and drifts in and out like some free-roaming electromagnetic nightmare, while the title track's excruciating freefall toward oblivion may be the most unapologetically twisted and nihilistic burst of industrial metal since MINISTRY's "Filth Pig" album.

AUTHOR & PUNISHER's debt to doom is most apparent on "Maiden Star", which is soporific, mechanistic shoegaze with a heart of impenetrable darkness, while "Misery" employs a persistent pulse that steadily builds to a bleakly bombastic crescendo of disfigured guitars and poisonous pomp. Only a cover of PORTISHEAD's "Glorybox" gives any indication that there is a twinkle in Shone's eye: "Krüller" is focused on the impending end of all things, and its own ability to turn that finality into sonic weapons of war. This is a triumph for the visceral potential of sound, and the emotional catharsis that comes when everything is cranked up to the absolute max. Being crushed by the wheels of industry has seldom felt more satisfying.