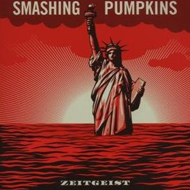 With every rock band under the sun seemingly reuniting, it was only inevitable that founder/songwriter/frontman Billy Corgan would reassemble the SMASHING PUMPKINS, one of the most highly acclaimed alternative acts of the Nineties. Since splitting up the band in 2000, Corgan has failed to achieve the same success with both another band project (ZWAN) and his own solo effort, making him confront the reality that his own name was linked inextricably to the group he formed in Chicago in the late Eighties.

The problem is that Corgan wants to have his cake and eat it too. While resurrecting the PUMPKINS name, he has not brought back the band in its entirety — only he and drummer Jimmy Chamberlin appear on this album. Although guitarist James Iha and especially bassist D'Arcy Wretzky did not play a large number of their own parts on the previous five PUMPKINS albums, Corgan has dispensed even with the facsimile of a fully-reformed band on the album and has hired anonymous side musicians for the touring lineup. In other words, this is less a band that another Corgan project operating under the PUMPKINS banner — which the band arguably was all along.

Even more grievously, however, Corgan doesn't sound very interested in actually making a SMASHING PUMPKINS album. The harder-rocking stuff on "Zeitgeist" — and whatever you might have thought of the original PUMPKINS, they had an ability to make some pretty thunderous noise — sounds tossed-off and half-baked, as if Corgan took the first ideas he had and turned them quickly into songs just to get it over with. "Doomsday Clock", "7 Shades of Black" and "Tarantula" rattle by, distorted and muddy-sounding, without even the kind of hook that made, say, "Bullet with Butterfly Wings" or "Cherub Rock" into instant classics.

It's the album's second half where things get interesting, only because Corgan strays from the straightforward heavy rock and explores different areas — which you start to think is what he wanted to do all along. The nine-minute "United States" is a bombastic, multi-part epic, mixing titanic chords with softer, more progressive passages, while "Bring The Light" is a melodic, shimmering, gorgeous pop-rock anthem that channels one of Corgan's biggest influences, QUEEN. The album's last three tracks — "(Come On) Let's Go", "For God and Country" and "Pomp and Circumstances" — all go further in this more melancholy, textured, progressive-pop direction, and also feature some of Corgan's best, most inspired vocals.

Speaking of which, the man's voice has always been an acquired taste — you either accept his plaintive whine or you don't. But at least on "Zeitgeist"'s more melodic cuts, he sounds more sincere than on the heavier material, where he just seems bored. The rest of the playing on the album is competent without being outstanding, although Corgan does pull off some Brian May-style solos that are a nice, nostalgic touch.

In the end, "Zeitgeist" seems like an album that's divided between the commercial expectations of what people want a SMASHING PUMPKINS record to sound like and where the band's guiding creative light wants to go with his own music. When he embraces that fully, Corgan is at his best, but the results could disappoint fans that love the crunchy, metal-based alternative rock on which the PUMPKINS first made their reputation. The result is a schizophrenic album that is neither a glorious return to form nor a bold reinvention of a beloved band.