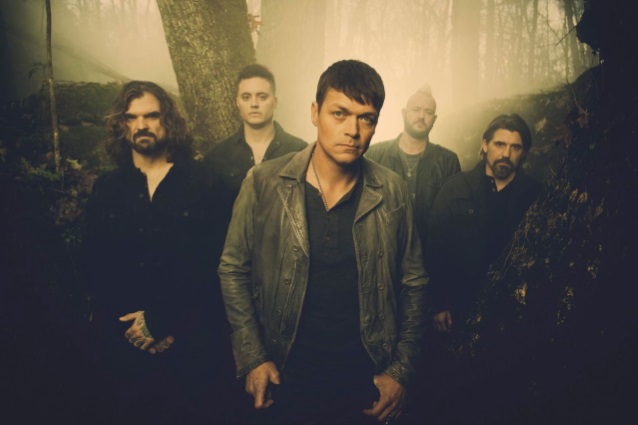 3 DOORS DOWN guitarist Chris Henderson says that he is "really proud" to have played Donald Trump's official pre-inauguration concert more than a year ago. The Make America Great Again! Welcome Celebration took place in January 2017 on the steps of the Lincoln Memorial. Other performers at the free event included country acts Toby Keith, Lee Greenwood, Larry Stewart of RESTLESS HEART, Marty Roe of DIAMOND RIO and actor Jon Voight.

Asked by Meltdown of the Detroit radio station WRIF what it was like to perform at the inauguration when other entertainers pulled out, including singer Jennifer Holliday and Bruce Springsteen cover band THE B STREET BAND, Henderson said (hear audio below): "That was an incredible experience, man, let me tell you. It was probably one of the scariest things I've ever done. We walked out on that stage at Lincoln Memorial, and to see the crowd… I mean, you hear all the reports about people are saying that there weren't that many people there. That's crap — that was the biggest crowd I've ever seen. I mean, it went on and and on and on and on."

The guitarist, who is a Navy veteran and CrossFit enthusiast, added that he is "just beyond proud to have been asked to do it and really proud that we did it, that we stepped up when everyone else was complaining and crying about it. And we took a lot of heat for it, but we still did it, stood up for what we believed in," he said. "And who knew? The next day we had a No. 1 record — a record that had been out over a year already."

Asked if the inauguration was the biggest gig he has ever played, Henderson said: "If it wasn't, it was close. We played some big festivals in Europe — with around 225, 250 thousand people over the course of a weekend. But it really seemed like a bigger crowd, man — it really did. And I've seen a lot of big crowds."

Chris's latest comments echo those he made to the Detroit Metro Times. Explaining that "the people that were mad about us for playing the inauguration didn't like us anyway," he insisted that taking part in the event "didn't do anything to our fanbase but strengthen it. We had a No. 1 record the day after we played the inauguration. It hasn't slowed us down or affected us one bit. Honestly, we don't care.

"We stand up for what we believe in, and the people that said we were done and ruined... look, I'm talking to you a whole year later about doing a tour, and we're still doing it and it's still the same as it was and it's still great," he said. "People get all upset about stuff; if you don't believe what they believe, they want to get all mad and put you down. That's unfortunate that it's like that, but that's what we live in. Oh, well.

According to Henderson, 3 DOORS DOWN's decision to play the inauguration "wasn't a Trump thing. That's what people don't understand. It was the inauguration of a president of the United States of America," he said. "Like, this is history-making stuff. It's a one-in-a-lifetime chance to do something for your country. So that's why we did it. There was no pushback. The only pushback came from people on the Internet that didn't like us to begin with, and didn't like Trump, and are never going to like Trump."

3 DOORS DOWN released its sixth studio album, "Us And The Night", in March 2016.