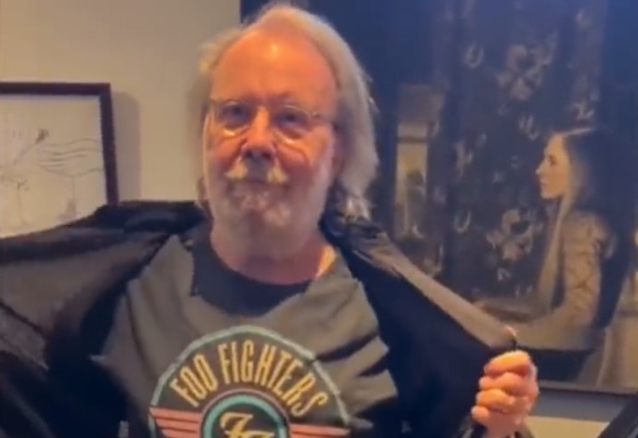 ABBA's Benny Andersson has shared a piano cover of FOO FIGHTERS' "Learn To Fly" in response to Dave Grohl wearing an ABBA shirt on stage at Glastonbury over the weekend.

The FOO FIGHTERS frontman sported a black top that had the gold ABBA logo printed on it when he joined Paul McCartney during the latter's headline set at the U.K. festival on Saturday (June 25).

Now, Andersson has acknowledged Grohl's appreciation for his band by sharing a short video of him playing "Learn To Fly", a song from the FOO FIGHTERS' third album, 1999's "There Is Nothing Left To Lose". At the end of the clip, Andersson can be seen turning toward the camera to reveal that he's wearing a FOO FIGHTERS t-shirt.

Grohl has been vocal about his love for ABBA over the years, saying last year that he was open to the idea of playing drums for the legendary Swedish pop band.

In an interview with BBC News after ABBA released its first two singles, "I Still Have Faith In You" and "Don't Shut Me Down", from its first album in 39 years, "Voyage", Grohl said that he shed tears when he first heard the new material from original members Andersson, Agnetha Faltskog, Bjorn Ulvaeus and Anni-Frid Lyngstad.

"Oh my god. I'm such a big ABBA fan," he said. "When I saw that they were coming back and they had a record, I shot that link to 100 people I knew, then listened to the new song and wept like a baby. I cried like a baby. Oh, man. It almost sounded like time hadn't passed. Plus it was such a beautiful, romantic, melancholy, bitter-sweet retrospective. It's amazing. ABBA can do no wrong."

Grohl then expressed his interest in playing drums for the Eurovision-winning pop band, saying: "Listen, I will get up and play drums at the opening of an envelope. Show me a drum set and I will sit down to it. So yes, I would play with ABBA."