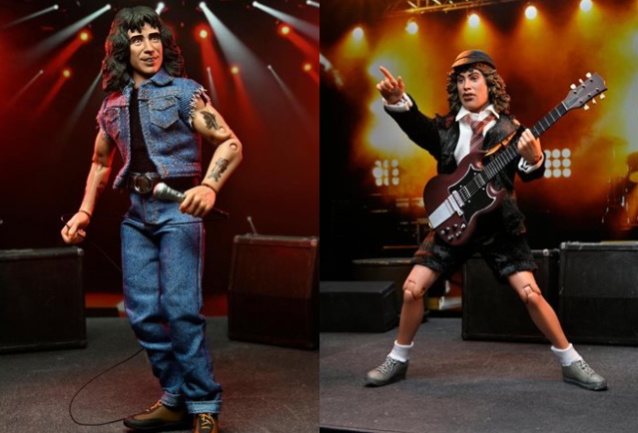 Bon Scott "Highway To Hell" clothed figure product description ($44.99 MSRP): "If rock singers were judged on a scale of 1 to 10, Bon Scott turns the dial to 11. One of the most influential frontmen of all time, Bon Scott's high-voltage vocals and rock 'n roll lifestyle set the bar for a generation of aspiring musicians. This fully articulated and extremely tattooed action figure is based on Bon Scott's appearance in AC/DC's 'Highway To Hell' music video and stands 8 inches tall."

* 8 inches (20.32cm)
* Made of plastic and fabric
* Based on the famous musician
* Fully articulated
* Real fabric clothing

Angus Young "Highway To Hell" clothed figure product description ($44.99 MSRP): "It's hard to find a rock fan alive who hasn't heard of Angus Young. This king of hard rock is the core of Aussie band AC/DC. His electrifying guitar work and unforgettable songs have driven them to superstardom around the world. This fully articulated action figure is based on Angus's appearance in the 'Highway To Hell' music video and stands 8 inches tall."

* 8 inches (20.32cm)
* Made of plastic and fabric
* Based on the famous musician
* Fully articulated
* Real fabric clothing

Few rock singers were as unforgettable — and have proved as enduring — as Bon Scott. As the frontman of AC/DC from 1974 until his tragic passing in 1980 (at the age of 33),his "rock 'n' roll pirate persona," street poet lyrics, and striking image (one of the first rockers to proudly sport multiple tattoos) have made him an absolute legend. Additionally, Bon's vocals were featured in several pre-AC/DC bands, including FRATERNITY, THE VALENTINES and THE SPEKTORS.

But really, it is the quality of the songs of the "Bon era" of AC/DC that serve as his greatest legacy — "Highway To Hell", "Sin City", "Whole Lotta Rosie", "Let There Be Rock", "Dirty Deeds Done Dirt Cheap", "TNT" and "It's A Long Way To The Top (If You Wanna Rock 'N' Roll)"… the list is seemingly endless.

How does Bon measure up to rock's all-time great frontmen? Classic Rock magazine declared him "the greatest rock n' roll frontman of all time" in 2004, beating out the lofty likes of Freddie Mercury, Robert Plant and Axl Rose in the process.

Scott was invited to join AC/DC by Malcolm and Angus Young in 1974, and achieved international stardom before his death at the age of 33 from alcohol poisoning.

Scott died of acute alcohol poisoning after a night of heavy drinking at a club in London, just days after attending a session with Malcolm and Angus Young where they began working on music for what became the "Back In Black" album.

According to the AC/DC FAQ web site, Bon and the friend, a musician named Alisdair Kinnear, had been drinking the evening of February 19, 1980 and Bon apparently fell asleep during the ride home. Kinnear could not wake Bon, so he left him in the car to sleep. Kinnear awoke early in the evening on February 20, checked on Bon, and found him unconscious in the car. Bon could not be revived, and was pronounced dead.

ANNOUNCEMENT!!
➖
Bon Scott 8” Clothed Action Figure
➖
If rock singers were judged on a scale of 1 to 10, Bon Scott turns...