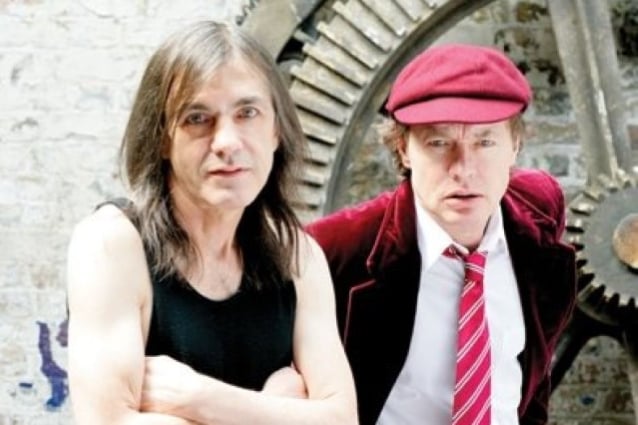 AC/DC's ANGUS YOUNG: 'It Was MALCOLM's Direction We Followed All The Way Through Our Career'

In a new interview with BBC Radio 2's "The Rock Show With Johnnie Walker", AC/DC guitarist Angus Young spoke about what it was like being in the recording studio without his brother, founding AC/DC rhythm guitarist Malcolm Young. Malcolm, who died in 2017 from effects of dementia at age 64, is credited as a writer on all 12 tracks on AC/DC's latest album, "Power Up".

Asked if it was "strange" not having his brother my his side, Angus said: "Yes, probably for my own feeling. Because even when we were very young as teenagers, my older brother used to take us into the studio to show us how everything worked in the recording studio. And he also used us — when he felt we were competent enough on our instruments, like the guitars — he would say, 'Okay, come in tonight and play on a song I'm gonna put down.' So he would use the two of us then. So Malcolm and me, from a very early age, we were so used to being in studios working together. And yeah, I miss him when he's not there in a physical sense. But I feel him when I've got the guitar playing. I can feel him around me."

Asked if feeling Malcolm's presence gives him extra confidence and inspiration, Angus said: "Yes, because he was very confident in just the way he even played guitar. He was that way from the beginning. I thought his playing was always so very solid whenever he picked up a guitar. He always seemed to know exactly what was coming next, and it always came across so clear and precise, the way he played. And besides that, he was also very practical in how he would do things. He knew exactly, when the band was formed, how he wanted it to sound, and the style of the music which we would play. So it was all his direction. And it was that direction we followed all the way through our career."