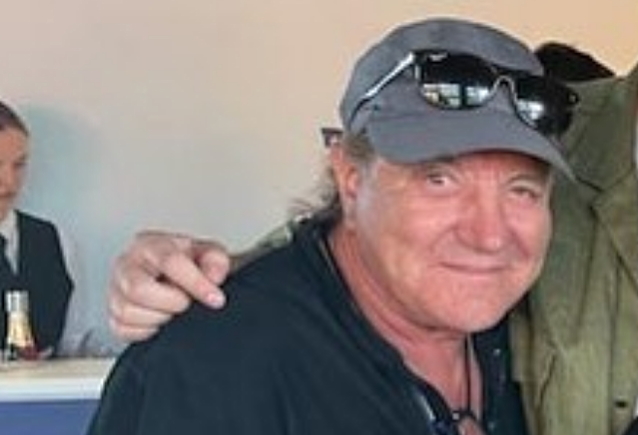 British singer-songwriter Sam Fender has shared a couple of new photos of AC/DC frontman Brian Johnson. The images in question were taken after Sam supported THE ROLLING STONES on July 3 at the British Summer Time Hyde Park festival.

In his Instagram caption, Fender called the 74-year-old AC/DC vocalist a "Geordie hero".

Also featured in one of the pictures is late-night TV host Jimmy Fallon who had previously interviewed Sam on NBC's "The Tonight Show Starring Jimmy Fallon".

"Just typed this sentence then creased at how daft it is 'Was lush for the boys to meet our geordie hero Uncle Brian (@acdc) yesterday after smashing Hyde park with @therollingstones, lovely to see @jimmyfallon again n all.'", Sam wrote.

With a laughing emoji, and a reference to an upcoming concert date, Sam added: "We all feel like we're in a simulation at the moment. Manchester on Wednesday! Come on!" Fender played a sold-out gig at the Castlefield Bowl in Manchester on July 6 as part of a tour which will hit the U.S. later this summer.

In a December 2020 interview with Terry Evans of Stingray Radio, Johnson was asked if the recent deaths of rock legends Eddie Van Halen, Neil Peart and Little Richard have made him think more about his own mortality. He responded: "Three or four weeks ago [in early October 2020], I turned 73, and I [thought], 'That can't be. What do you mean 73? I haven't done enough yet. I haven't started yet.' [Laughs] 'I've got things to do.' And it's just crazy. And I'm happy I have that outlook on life.

"When you get to this age, you start noticin' people poppin' — just here and there," he added. "But my dad used to say something — he used to say, 'Son, you just play the cards you're dealt.' And that's it."

AC/DC postponed the last ten dates of its North American tour in 2016 after doctors told Johnson he faced a total loss of hearing if he did not stop touring immediately. He was eventually replaced on the road by GUNS N' ROSES vocalist Axl Rose.

To enable him to perform live with AC/DC again, Johnson worked with audio expert Stephen Ambrose, who said he could help resolve the singer's hearing problems.

Ambrose, who invented the wireless in-ear monitors that are widely used by touring artists today, claimed to have invented a new type of ear-bud that would allow Johnson to perform without causing further damage to his eardrums. After three years of experimenting and "miniaturizing" the equipment, Johnson said the technology could allow him to tour again.

AC/DC's comeback album, "Power Up", was released in November 2020. The LP was recorded over a six-week period in August and September 2018 at Warehouse Studios in Vancouver with producer Brendan O'Brien, who also worked 2008's "Black Ice" and 2014's "Rock Or Bust".

In an interview with Apple Music, Johnson stated about the technology that enabled him to return to performing live: "I've gotta tell you, it was just lucky. When this wonderful gentleman came up and was looking for me; he was an audio professor. And he wanted to try this new technology. And he said, 'Listen, we could do it together, if I can come down and visit you.' And I thought it might have been all smoke and mirrors, somebody trying it on, but he was the actual, genuine article, and he did fly down all the way up from Denver, Colorado. And we sat there for two days, and I just couldn't believe the results. But, unfortunately, it was the size of a car battery, so we spent the next two years basically miniaturizing, which is the hard thing. And anyway, it worked well.

"When we'd done the album and we'd shot a video in Amsterdam, Angus [Young, AC/DC guitarist] said, 'Do you wanna do a rehearsal?' Because I didn't wanna go through what I went through again. I said, "Yeah.' And then Angus put the whole backline up. And they were saying, 'Well, we're gonna start quietly,' and we said, 'No, no. I want full battlefield conditions.' And we put it in, in the ears, and we were expected at least maybe two days of screwing around with, but boy, oh boy, it worked straight away… I don't have the words. I really don't have the words to tell you how I felt. But I know 'happy' was one of them. It was really good."