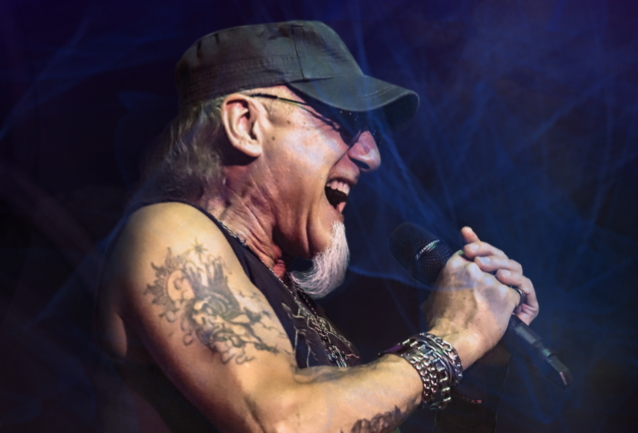 German/American metallers ACCEPT are writing and recording material for a new studio album. The disc will be the follow-up to 2017's "The Rise Of Chaos", which marked the band's first release with guitarist Uwe Lulis and drummer Christopher Williams, replacing Herman Frank and Stefan Schwarzmann, respectively.

During an appearance on the "Rock On The Rise" podcast, ACCEPT singer Mark Tornillo stated about the progress of the recording sessions for the band's next LP (hear audio below): "When this [coronavirus pandemic] first started, I had been back and forth to Nashville a few times — or a couple of times, anyway — working with [guitarist] Wolf [Hoffmann]. And when they found out that the JUDAS PRIEST tour was getting canceled also, [longtime ACCEPT producer] Andy [Sneap, who plays guitar for JUDAS PRIEST] had some free time, so Andy went to Nashville. So I went back, and we damn near recorded the whole new album."

Elaborating on how far ACCEPT has come in tracking the new disc, Tornillo said: "We're nine songs in. They're not all complete… We've written, I would say, somewhere around 15 or 16 songs, so that's what we actually got to record. There are some rhythm tracks done on some of the other ones, but I didn't get to sing them. And some things, I think, might actually be complete, which Andy may be mixing at this moment. But there's talks of us dropping a single this summer and hopefully getting this thing out by Christmas, if possible. We'll see how that plays out."

Regarding the musical direction of the new ACCEPT material, Tornillo said: "There's gonna be some surprisingly really good shit on this record… They're my children at this point, so I'm kind of proud of 'em. We'll see how they turn out. We'll see what they grow up to be… There's gonna be some different kind of things on this one — heavy and dark."

ACCEPT's upcoming album will mark the band's first release without founding bassist Peter Baltes, who exited the group in November 2018. He has since been replaced by Martin Motnik.

Speaking about Baltes's departure from ACCEPT, Tornillo told "Rock On The Rise" host Justin Smulison: "We kind of knew it was coming. He was unhappy for, I'm gonna say, a couple of years — from 'Blind Rage' [2014] on. And, really, nobody could get a grip on why or what was going on. We were touring, and he'd be staying away from everybody. It was kind of weird. So we had a kind of feeling that something was gonna happen. I think he and Wolf and Gaby [Hoffmann, ACCEPT's longtime manager and Wolf's wife] might have actually been talking about it at the time, but nobody saw it coming like that. We got blindsided.

"This is the first [album] without him playing bass, and it's also the first album without him as a writer," Mark continued. "So the weight of the whole thing pretty much falls upon Wolf and I, relying on the other guys for help. And Gaby" — also known throughout the '80s by the mysterious alias "Deaffy" — "still has her two cents in there sometimes, which she does. I write all the lyrics at this point, but I still rely on her for some lyrical ideas, and she never disappoints."