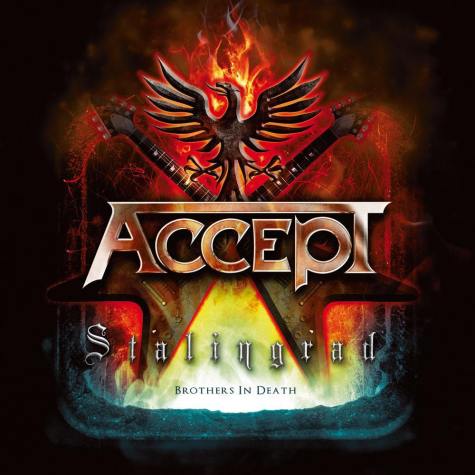 "Stalingrad"will be made available in the following formats:

The "Stalingrad" title track is available for streaming in the YouTube clip below.

Regarding the musical direction of ACCEPT's next album, Hoffmann told The Rock Pit last year, "We're just gonna have the same attitude, the approach; we're just gonna do more of the same, you know, without it being the same. More similar-style stuff, hopefully fresh new ideas. And I mean, we're not gonna… The intention is not to change it right now. I mean, why would we? . . . But I have to say, it's always easier said than done. It's incredibly difficult to write songs that are sort of reminiscent of the past but they're not, you know, rip-offs of your own music. That sounds incredibly very simple, but it's really not, especially if you have a sort of history of 15 albums or whatever we have. Then there are always similarities that you have to avoid. It can't be too close, but it can't be too far away from it. So it's a pretty fine line that you have to walk sometimes, but, you know, hopefully we'll manage again."

ACCEPT's July 15, 2011 performance at last year's edition of the Bang Your Head!!! festival in Balingen, Germany marked the band's return to a five-piece format after the group spent a couple of months touring as a quartet due to the fact that guitarist Herman Frank suffered broken ribs and a punctured lung in a stage fall on May 6, 2011 in San Antonio.

"Blood Of The Nations" was released in North America on September 14, 2010 via Nuclear Blast Records. Recorded at Sneap's Backstage Studio in Derbyshire, England, the CD marked the debut of the band's latest addition, vocalist Mark Tornillo (ex-TT QUICK).