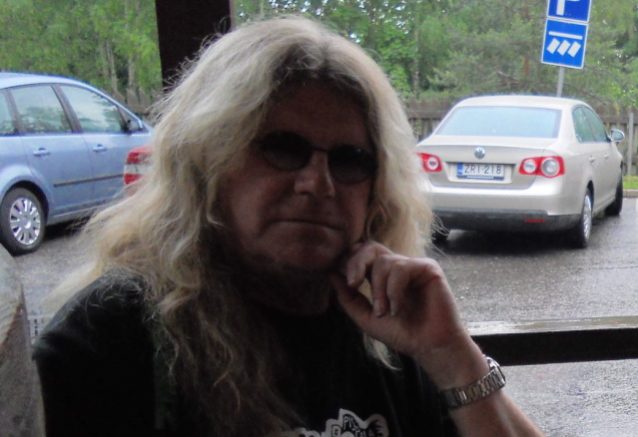 Acclaimed Finnish-Swedish rock drummer Henrik "Hempo" Hildén has died at the age of 69.

Born in Tampere, Finland, Hildén, who has played with John Norum, Don Dokken and Glenn Hughes, among others, moved to the Swedish town Karlskrona in the 1990s, where he remained until his death. He was considered one of Sweden's most in-demand rock drummers.

According to SVT, Hildén died earlier today (Monday, May 30) after a period of illness. Several of his closest relatives, including his daughter Bella Hildén, were by his side at the time of his death.

Swedish multi-instrumentalist Snowy Shaw, who has played with KING DIAMOND, SABATON, MERCYFUL FATE, THERION, DREAM EVIL and DIMMU BORGIR, paid tribute to Hempo, writing on Facebook (translated from Swedish): "In memory of Hempo Hildén. Rest in Peace drum brother. My first meeting with the legend was at Cool Cat in the spring of 1993 where he complimented me on my drumming and thought I looked like TRASH guitarist Gene Ball with blonde hair down to his ass. (Still don't know which one made me the happiest)"

Swedish guitarist Tommy Denander also reacted to Hempo's death, writing: "RIP Hempo Hildén. Great Swedish drummer for John Norum, Dokken, Glenn Hughes etc plus many big Swedish artists. We played together a lot since the 80's and he was not only a great drummer but just as lovingly crazy as only these old school rockers can be".

Norum said in a statement: "I'm devastated by the news I received that my dear friend and drummer Hempo Hildén has passed away. Hempo was a fun lovin' guy with a heart of gold and an amazing drummer. My thoughts and prayers go out to his family. RIP my friend."

Hempo was the original drummer for Don Dokken's solo band and appeared in a few early photo sessions with Don and the other musicians before being replaced prior to the recording of 1990's "Up From The Ashes" album.

I'm devastated by the news I received that my dear friend and drummer Hempo Hilden has passed away. Hempo was a fun...